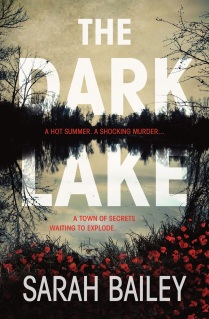 Title // The Dark Lake
Author // Sarah Bailey
Publication Date // May 24th 2017
Publisher // Allen and Unwin
Genre // Crime
Price // AUD $32.99
Rating // ✭✭✭✭
synopsis.
A hot summer. A shocking murder. A town of secrets, waiting to explode. A brooding, suspenseful and explosive debut that will grip you from the first page to the last.
There were a few minutes when I was alone with her in the autopsy room. I felt wild. Absent. Before I could stop myself I was leaning close to her, telling her everything. The words draining out of me as she lay there. Her long damp hair hanging off the back of the steel table. Glassy eyes fixed blindly on the ceiling. She was still so beautiful, even in death.

Our secrets circled madly around the bright white room that morning. Rocking back and forth on my heels as I stood next to her, I knew how far in I was again, how comprehensively her death could undo me. I looked at Rosalind Ryan properly for the last time before breathing deeply, readying myself, letting her pull me back into her world, and I sank down, further and further, until I was completely, utterly under.

A beautiful young teacher has been murdered, her body found in the lake, strewn with red roses. Local policewoman Detective Sergeant Gemma Woodstock pushes to be assigned to the case, concealing the fact that she knew the murdered woman in high school years before.

But that’s not all Gemma’s trying to hide. As the investigation digs deeper into the victim’s past, other secrets threaten to come to light, secrets that were supposed to remain buried. The lake holds the key to solving the murder, but it also has the power to drag Gemma down into its dark depths.

The Dark Lake is an addictive crime thriller, a mesmerising account of one woman’s descent into deceit and madness, and a stunning debut that is already causing a stir around the world.
(Allen and Unwin)
review.
The Dark Lake is the debut novel of Melbourne-based author, Sarah Bailey, and it delivered on intrigue and pathos, and the harsh realities of grief.
Local teacher, Rosalind Ryan, is found murdered, her body floating in a lake. Local Detective Sergeant, Gemma Woodstock, is assigned the case despite having attended high school with the victim, and the case is an interesting blend of personal and impersonal for her as she tries to unravel who killed Rosalind and why.
The majority of the story is told from Gemma’s perspective – with small minor character interludes that, while not strictly necessary, did provide additional insight and clues into the case – and she is an interesting woman: a dedicated – to the point of obsession – police officer, a mother, a partner, vulnerable and ambitious, and consistently stuck between decisions she doesn’t want to make and the reality of her past. There are times when she is quite unlikeable – which works perfectly for the story being told, because all of her decisions are based on her own self-interests and are very telling of who she is and where she is currently at in both her personal and professional lives.
Set in Summer, The Dark Lake has the same hot, claustrophobic feel about it, especially as the town approaches Christmas with the unsolved murder hanging over it. There’s internal and external pressures exuding forces of Gemma to solve the case to the point where it begins to take over her life and we, as readers, begin to question her objectivity.
This was a solid debut novel and a great crime book, with a victim who is so complex and mysterious that I began to question if she was actually the victim at all.
Overall I gave The Dark Lake 4 out of 5 stars.

(Thank you to Allen and Unwin for providing me with a copy of The Dark Lake in exchange for a fair and honest review. All thoughts and opinions are my own.)

One Reply to “Book Review | The Dark Lake”