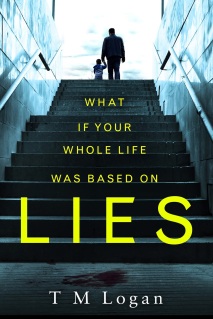 Author // T.M. Logan
Publication Date // May 24th 2017
Publisher // Bonnier (twenty7)
Genre // Psychological Thriller
Price // AUD $29.99
Rating // ✭✭✭⭐︎
synopsis.
What if your whole life was based on lies? A gripping new psychological thriller of secrets and revenge.
When Joe Lynch stumbles across his wife driving into a hotel car park while she’s supposed to be at work, he’s intrigued enough to follow her in.

And when he witnesses her in an angry altercation with family friend Ben, he knows he ought to intervene. But just as the confrontation between the two men turns violent, and Ben is knocked unconscious, Joe’s young son has an asthma attack – and Joe must flee in order to help him.

When he returns, desperate to make sure Ben is OK, Joe is horrified to find that Ben has disappeared.

And that’s when Joe receives the first message… Gripping, unputdownable and packed with twists and turns from the first page to the very last, this stunning thriller will make you question whether we can ever really trust the ones we love…
(Allen and Unwin)
review.
Lies was a fast-paced psychological thriller that will have you looking at technology in a whole new way.
The story opens with main character, Joe Lynch, spotting his wife having an argument with family friend, Ben, in a hotel lobby when she should be playing tennis. In an effort to find out what’s going on, his confrontation with Ben turns violent and when Joe’s son has an asthma attack, he leaves an unconscious Ben in the carpark. Ben’s disappears and suddenly Joe begins to receive strange messages on his phone and computer.
While Lies was fast-paced and gripping, it was a tad predictable. Ben, as a character, was very naive and trusting and there are times when I wanted to shake him and tell him to open his eyes. He doesn’t understand the world he’s suddenly been thrust into, or the danger he is in, and that’s not a bad thing. You want to find out if he’s going to make it through everything that’s happening, or whether he’ll be buried by his lies, and the lies of those around him.
The scariest part is the use of technology to stalk and commit crimes. Between smart phones, apps and social media, Ben’s life as he knows it begins to unravel at increasing speed. The way people perceive and automatically believe everything that’s put online is showcased in a terrifying way, and even those people closest to be Ben begin to turn their back on him, believing images and posts rather than the man himself. It is certainly reflective of the current times we live in.
Overall I gave Lies 3.5 out of 5 stars. A solid read if you enjoy psychological thrillers.

(Thank you to Allen and Unwin for providing me with a copy of Lies in exchange for a fair and honest review. All thoughts and opinions are my own.)