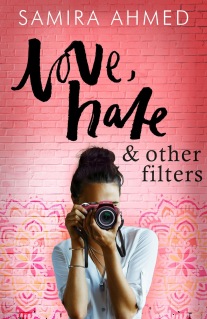 Title // Love, Hate & Other Filters
Author // Samira Ahmed
Publication Date // January 2018
Publisher // Allen & Unwin
Readership // Young Adult
Genre // Contemporary
Australian RRP // $19.99
Rating // ✭✭✭✭
I received a copy of Love, Hate and Other Filters from the publisher in exchange for an honest review. All thoughts and opinions are my own.

Love, Hate & Other Filters is an important book that highlights diversity, racism and young love.
In her debut novel, Samira Ahmed writes about Maya, a teenager who dreams of becoming a film maker in New York, in spite of her family’s wishes for her to be the dutiful Indian daughter who becomes a doctor. She’s spirited, determined and occasionally caught between a guy she should like and one that she does like. Everything in her life is normal until a suicide bomber, sharing her last name, strikes a city far from hers and suddenly her life is upended.
This is an important book, because not only does it have a wonderful look at life as an Indian-American teenager trying to balance her family’s wishes with her own goals and desires, but it showcases how easily fear can escalate and cause people to do bad things to other people. The suicide bombing doesn’t happen until the second half of the book, but when it does, the tone of the book changes dramatically as Maya is left to live her normal life while around her people react with suspicion and hate. That was the most interesting part of the book for me, because it highlights that we still need a shift in thinking, even in this day and age, and blaming one person simply because they share a name with someone who did a terrible thing is not the answer. Not to mention, seeing how it impacts on Maya and her relationships is very powerful.
I’ll be honest and say that the love-triangle (while short-lived, and overall, not too bad) and romance aspect of the book did little for me, it did set the tone for who Maya is, thus providing a solid base from which the reader can see the shift in Maya after the bombing. Kareem was gorgeous, and the first few scenes that he shared with Maya were some of my favourite. Maya’s struggle to do what’s right by her family and what she felt was right were also well done.
Overall, I gave Love, Hate & Other Filters 4 stars.