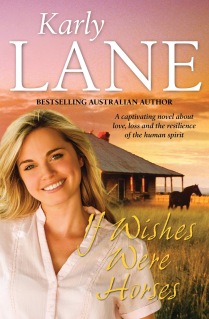 Title // If Wishes Were Horses
Author // Karly Lane
Publication Date // May 2017
Publisher // Allen and Unwin (Arena)
Genre // Popular Fiction
Price // AUD $29.99
Rating // ✭✭✭✭⭐︎
synopsis.
This captivating story of two people recovering from terrible tragedy and loss, and the importance of community, friendship and the power of love.
Already struggling to come to terms with the tragic death of her husband, Sophie Bryant nearly loses her own life while attending a domestic dispute as a paramedic. Diagnosed with a mild form of post-traumatic stress disorder, Sophie decides to accept a posting to the remote township of Hilsons Ridge.
Soon after her arrival, Sophie decides on a whim to buy an old house on the outskirts of town. There, she discovers the diary of a light horse trooper from the First World War, which she finds fascinating.
Local vet, Zac Conway, is also struggling in the wake of losing his life partner. So when Sophie brings an abandoned horse to him for treatment and they get to know each other, Zac is surprised to feel emotions he never hoped to experience again.
The peace and tranquillity of living in her new community sees Sophie gradually recovering from her trauma and grief. As she discovers more about her farm’s history, she realises that the past and the present are irrevocably connected and, just like love, it waits for the right person to come along to unlock its secrets.
If Wishes Were Horses is a totally captivating novel combining romance and history with a dash of suspense.
(Allen and Unwin)
review.
If Wishes Were Horses is a beautiful story about overcoming tragedy and loss, building relationships and discovering community.
Set in a small, rural town, Sophie Bryant has taken over the role as local paramedic after she is shot while attending a call in the city. Recovering from both her injuries and the death of her husband, the change from the city to country pace is exactly what she needs and Sophie soon finds herself charmed by the town, it’s people, and an old house she discovers on the outskirts of town. She buys it on a whim, and while cleaning it she discovers artefacts left by a Word War I light horse trooper, and begins to learn about the soldier’s history – both at war and at home in Hilson’s Ridge.
If Wishes Were Horses was an easy, but highly enjoyable read. Karly Lane deftly describes the small country town and its’ people; they come to life on her pages. Their struggles and triumphs, both individually and as a community, seem real, just like Sophie – who, while initially an outsider, comes to discover the truth about herself and her priorities as a result.
Sophie was a likeable woman; the loss of her husband and her own injuries have left their mark on her and she’s determined to find her own peace with both. The relationship she develops with the various side-characters was lovely to read about, and through her we learn about them. Her first meeting with Zac is hilarious and awkward and simply builds from there.
It was really nice to read a story in which the romance isn’t the central focus. While it’s definitely an important part of the story, the heart, I believe, lies in the story’s ties to World War I. I began reading If Wishes Were Horses just before Anzac Day and it struck a chord with me as Sophie begins to read the diary – the realities of war and the impact it leaves afterwards were heartbreaking and poignant and truly raised this story for me.
Overall, I gave If Wishes Were Horses 4.5 out of 5 stars.
Thank you to Allen and Unwin for sending me a copy of If Wishes Were Horses for a fair and honest review. All thoughts and opinions are my own.