Title // Watch Over Me
Author // Claire Corbett
Publication Date // May 2017
Publisher // Allen and Unwin
Genre // Thriller
Rating // ✭✭✭✭
Warnings // Sexual content
synopsis.
It is the present day. The foggy northern city of Port Angelsund is under occupation by the soldiers of Garrison. Sylvie is a young woman just trying to survive. When she is singled out for punishment at a Garrison checkpoint, a young lieutenant rescues her from torture. Though she knows the terrible risks of collaboration, she cannot stop herself from falling in love. Watched by Garrison’s vast machinery of surveillance, Sylvie discovers she is also under the protective and suspicious gaze of her lover.
When her older brother returns on a terrorist mission that will throw the city into chaos, Sylvie’s loyalties are tested beyond breaking point. Her deep bond with her brother and her illicit passion for her Garrison officer are loves that cannot coexist. Whatever she does is betrayal.
In the spirit of Hiroshima Mon Amour and Suite Francaise, this sensual and heart-breaking novel brings the classic conflicts of war and occupation, devotion and treachery, up to the present minute. While the unimaginable power of modern warfare advances, Watch Over Me reminds us that the things at stake-survival, refuge and love-remain the things worth fighting for.
(Allen and Unwin)
author.

review.
Watch Over Me is a contemporary thriller that will keep you on the edge of your seat.
Sylvie is a young woman trying to survive with her family in a country that has been broken by war and occupation. The story deals with the long-term implications of occupation on the people who are living through it and the result is both heart-wrenching and compelling.
Told in second-person narrative, from Sylvie’s perspective, we begin to build a picture of her daily life, her stressors and where her loyalties lie – and if it’s even that simple. When she is rescued from punishment at a checkpoint by a young lieutenant – whose face she doesn’t even see – she becomes enamoured with the man who saved her life without even knowing who she is. Their paths cross again and the two begin an illicit affair – something that puts her at odds with people within her community, and especially with her older brother who has returned with intentions of causing trouble for the occupying forces.
The atmosphere Claire Corbett has created is incredible – the cold, harsh landscape that is compounded by the constant threat of attack. It feels oppressive and that’s fitting given the subject material.
Watch Over Me was a surprising read. There were times when I questioned why Sylvie would willingly submit to a man who’s job it is to keep her people in check; other times I could understand perfectly the decisions she made to simply survive.
There’s a lot of commentary on the way men, in a world like this, treat women – as play things, as weaker than men, and as collaborators or traitors who simply doing what they need to survive. What was fascinating to read was how the female characters responded and tried to find their place in this new, harsher world that was unfamiliar to them.
This is one of those books that you have to read in its entirety to understand the consequences of the decisions made by every character and it was enthralling. I adored the ending of this book immensely.
I gave Watch Over Me 4 out of 5 stars. A gripping read from start to finish. 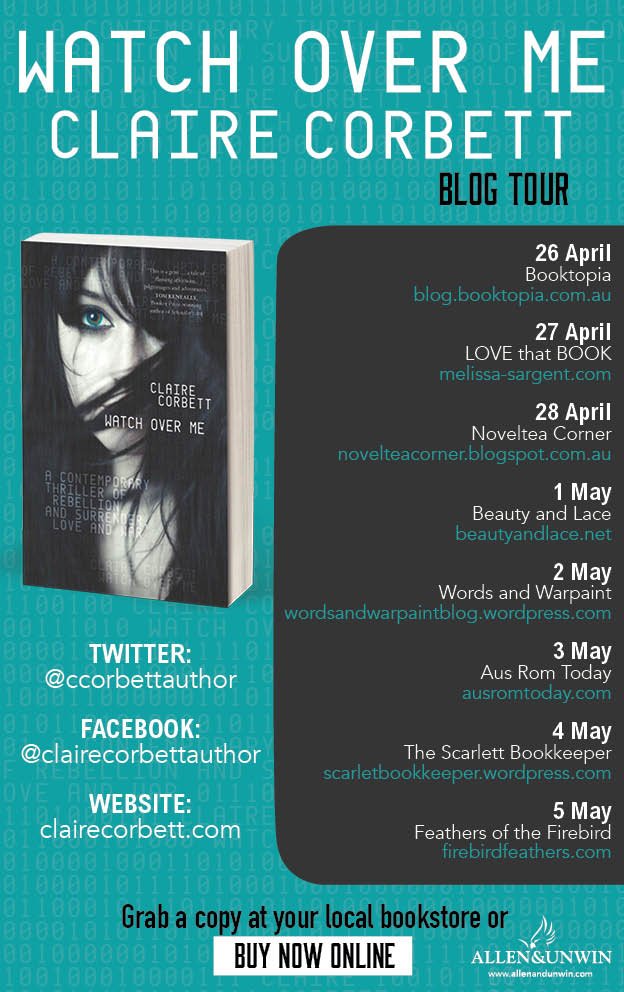 Thank you to Allen and Unwin for sending me a copy of Watch Over Me for a fair and honest review. As always, my thoughts and opinions are my own!