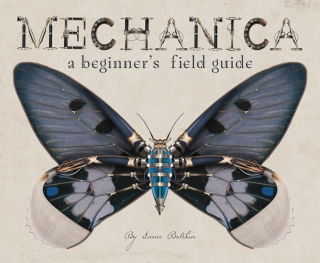 Title // Mechanica: a Beginner’s Field Guide
Author // Lance Balchin
Publication Date // August 2016
Publisher // The Five Mile Press
Genre // Picturebook, Steampunk, CBCA Shortlist
Rating // ✭✭✭✭✭
synopsis.
An imaginative field guide to the fantasy world of Mechanica creatures, with amazing and beautiful steampunk-inspired illustrations.
In this field guide from the future, a dashing explorer-Miss Liberty Crisp-details amazing creatures known as Mechanica: human-created life forms designed to replace extinct species.
Set in the twenty-third century, the book describes how Earth could no longer support wildlife. The warnings had been ignored. Corporations continued to expose the environment to chemical and radioactive waste, and many Earth species began to disappear. By 2200, vast areas of the world had become uninhabitable and wildlife extinct. In place of the lost wildlife species, the corporations began to create Mechanica. But the Mechanica escaped their confinement, and started to develop in the wild on their own. Filled with inventive and awe-inspiring images and details, this book is sure to spark readers’ imaginations! Kids will marvel at the steampunk-inspired renderings of mechanical bugs, birds, bats, snakes, and more!
(Good Reads)
review.
Mechanica: a Beginner’s Field Guide is a fictional-non-fiction field guide to the wonderfully unique world of the Mechanica creatures – animals that have been built to replace the lost animals of Earth.
First, and foremost, what captured my attention the most, were the beautiful, steampunk-inspired illustrations that accompanied the field notes on each page. They are just stunning to look at, with wonderfully unique details and corresponding histories and facts.
I knew nothing about the concept of the book before I opened it – I didn’t even read the blurb. What I read surprised me in a great way. The world, as we know it, has changed significantly by the year 2200. Large portions of the world are uninhabitable due to pollution and corporate expansion, and this has led to the extinction of wildlife. Corporations begin to custom build wildlife to replace their living alternatives – but there’s a cost. These magnificent and technologically advanced Mechanica escape confinement and begin to expand and develop themselves in the wild, independent of humans.
Told in a field guide form, this book is a way of raising and discussing environmental issues and the impact humans have on nature. It’s also simply  a unique picture book that will delight children with an interest in animals and technology. Who doesn’t love a bit of futuristic steampunk?
I gave Mechanica 5 out of 5 stars. It has been shortlisted as a CBCA Picture Book of the Year.