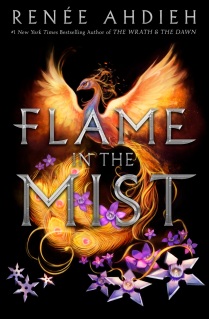 Title // Flame in the Mist (Flame in the Mist #1)
Author // Renee Ahdieh
Publication Date // May 2017
Publisher // Hachette Australia
Genre // Young Adult, Fairytale Retelling
Rating // ✭✭✭✭⭐︎
synopsis.
The daughter of a prominent samurai, Mariko has long known her place—she may be an accomplished alchemist, whose cunning rivals that of her brother Kenshin, but because she is not a boy, her future has always been out of her hands. At just seventeen years old, Mariko is promised to Minamoto Raiden, the son of the emperor’s favorite consort—a political marriage that will elevate her family’s standing. But en route to the imperial city of Inako, Mariko narrowly escapes a bloody ambush by a dangerous gang of bandits known as the Black Clan, who she learns has been hired to kill her before she reaches the palace.
Dressed as a peasant boy, Mariko sets out to infiltrate the ranks of the Black Clan, determined to track down the person responsible for the target on her back. But she’s quickly captured and taken to the Black Clan’s secret hideout, where she meets their leader, the rebel ronin Takeda Ranmaru, and his second-in-command, his best friend Okami. Still believing her to be a boy, Ranmaru and Okami eventually warm to Mariko, impressed by her intellect and ingenuity. As Mariko gets closer to the Black Clan, she uncovers a dark history of secrets, of betrayal and murder, which will force her to question everything she’s ever known.
(Good Reads)
review.
Flame in the Mist is a loose retelling of Mulan set in feudal Japan with magical undertones. It deals with duty, honour and gender expectations, and what it means to be your own person. With a bit of romance thrown in, for good measure.
I was really apprehensive going in to reading Flame in the Mist. I really wanted to read it, but I was cautious about how I might connect with the material and how close a retelling it was to Mulan. The answer is: it’s a loose retelling. There are definitely elements that follow a similar storyline, but it is definitely it’s own tale, and Mariko is a kickass female character in her own right. And while it took me a little while to get into the story, by the time I hit 40% of the way through, I was hooked and I couldn’t put it down.
Mariko was a stand out character for me – a young woman about to married to one of the emperor’s sons who’s convoy is attacked by the Black Clan on the way. She’s let a life of privilege, as well as expectation, but has always been curious about things that a woman need not be, and thus been deemed an odd child. After her convoy is attacked, she disguises herself as a boy in order to infiltrate the Black Clan to exact her own style of retribution. What I really enjoyed about her character was how strategic she is – she’s a thinker, a planner. Being brave and fighting isn’t a natural thing for her and she makes mistakes. She’s stubborn, fierce, and determined to carve out her own path.
We also get the perspective of her twin brother, Kenshin, the Dragon of Kai, who is tasked with finding Mariko. he believes her to be alive when others believe her dead in the attack. I love the way Ahdieh wrote their relationship – there’s clearly a lot of love and respect shared between the two of them, even though we only see them together a few times in this first book.
Finally, we follow the intrigue surrounding the Black Clan, particularly Okami, a warrior with a mysterious ability and a serious chip on his shoulder. His relationship and banter with Mariko was fantastic and there were moments when they both pushed each other beyond their own preconceived notions and that was wonderful. While we didn’t get to know all of the smaller, side characters in the Black Clan, I’m hoping in subsequent books we might learn more about their back stories.
While there is a romantic hate-to-love relationship that develops in this book, I enjoyed the journey it took to get there and I don’t think it detracted from the overall story. If anything, it made it more intense. There were also some lovely statements about the strength of women as women without comparison to men. I highlighted quite a few passages towards the last quarter of the book, because they were just beautifully written.
Without knowing too much detail on the factual details of feudal Japan, or even the traditional Mulan story, I can’t vouch for its accuracy (or even it’s lack of accuracy). What I can say is that I thoroughly enjoyed this story and not only will I be purchasing the physical copy of the book when it’s released in May 2017, but I will be counting down the days until the second book is released. This is a book that left me wondering about the characters, wondering how the story will continue and how the story (as a whole) will eventually be resolved. It’s not perfect, but it’s an absolutely wonderful book that I’m so glad I read.
I gave Flame in the Mist 4.5 out of 5 stars.

I received a copy of Flame in the Mist from Netgalley in exchange for a fair and honest review. All thoughts and opinions are my own.

One Reply to “Book Review | Flame in the Mist”