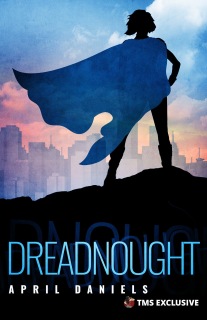 Title // Dreadnought (Nemesis #1)
Author // April Daniels
Publication Month // January 2017
Publisher // Diversion Publishing
Genre // Young Adult, Science-Fiction
synopsis.
Danny Tozer has a problem: she just inherited the powers of the world’s greatest superhero. Until Dreadnought fell out of the sky and died right in front of her, she was trying to keep people from finding out she’s transgender. But then her second-hand superpowers transformed her body into what she’s always thought it should be. Now there’s no hiding that she’s a girl.
It should be the happiest time of her life, but between her father’s dangerous obsession with curing her girlhood, her best friend suddenly acting like he’s entitled to date her, and the classmate who is secretly a masked vigilante, Danny’s first weeks living in a body that fits her are more difficult and complicated than she could have imagined.
She doesn’t have much time to adjust. Dreadnought’s murderer, a cyborg named Utopia, still haunts the streets of New Port City. If Danny can’t sort through the confusion of coming out, master her powers, and stop Utopia in time, humanity faces extinction.
(Good Reads)
review.
Dreadnought is a book that has had building hype in the book community for being a young adult super-hero book with a transgender protagonist. Both of these were huge incentives for me as a reader because I’m a huge fan of super-hero media and I’ve not read many #ownvoices transgender-cantered stories and that is something I really want to change.
What can I say about this book? It blew me away!
While reading, I was constantly feeling so many different emotions that it was almost hard to keep up. Danny has always know she’s a girl, but a chance encounter with a dying Dreadnought changes her world, giving her the body to match her identity, along with some pretty fabulous super powers to boot. What follows is her explorations of not only having these super-abilities, but having to deal with the fall-out of her family learning about the change (and not well, there were many times when I felt so much rage for how Danny is treated). There were a lot of different reactions to Danny’s revelation from many characters – both positive and negative – and the way Danny ultimately struggles with and accepts the various reactions was, at times a bit confronting to read, but Daniels wrote these scenes so beautifully.
Danny lives in a world were metahumans with special abilities or super powers is common place. There’s a little back story into the evolution of this world, mainly focused on the Dreadnought mantel, which is passed on after the death of the previous title holder. We are simply thrust into this world where superheroes are the norm, and that was refreshing. Yes, it would have been wonderful to have this aspect fleshed out in more detail, but I felt the main focus was on Danny’s journey and that was necessary. (Also, being the first book in a series, there’s plenty of time to delve into the backstories of all the wonderful characters.)
If you like action books, this is fabulous. If you like books that deal with diversity head-on, focusing on the positives and negatives (without sugar coating either) this is for you.
Dreadnought is a book that will send your emotions spinning in so many directions. You’ll laugh and cry and rage and cheer for Danny as she discovers exactly who she is. I gave Dreadnought 4.5 out of 5 stars.
I’m so glad I read this and I can’t wait to get a physical copy to add to my shelves.

(Thank you to Netgalley for providing me with a review copy in exchange for a fair and honest review. All thoughts and opinions are my own.)