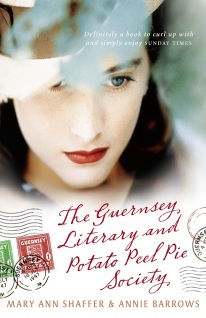 It’s 1946, and as Juliet Ashton sits at her desk in her Chelsea flat, she is stumped. A writer of witty newspaper columns during the war, she can’t think of what to write next. Out of the blue, she receives a letter from one Dawsey Adams of Guernsey – by chance he’s acquired a book Juliet once owned – and, emboldened by their mutual love of books, they begin a correspondence.

Dawsey is a member of the Guernsey Literary and Potato Peel Pie Society, and it’s not long before the rest of the members write to Juliet – including the gawky Isola, who makes home-made potions, Eben, the fisherman who loves Shakespeare, and Will Thisbee, rag-and-bone man and chef of the famous potato peel pie. As letters fly back and forth, Juliet comes to know the extraordinary personalities of the Society and their lives under the German occupation of the island. Entranced by their stories, Juliet decides to visit the island to meet them properly – and unwittingly turns her life upside down.

Gloriously honest, enchanting and funny, The Guernsey Literary and Potato Peel Society is sure to win your heart.
(Good Reads)
review.
The Guernsey Literary and Potato Peel Pie Society was gifted to me by a friend because it was her favourite book and she thought I might enjoy it. I don’t often read a lot of general fiction and it sat on my TBR shelf for most of 2016 – not because I didn’t want to read it but for some reason I was scared to start it. The fear being that I wouldn’t like it at all or I would be engaged in the story.
I can happily report I was wrong. This story – told through a series of letters from a writer named Juliet to her editor, friends and a group of people she’s never met in Guernsey – was simply charming. That’s best word I can use to describe it. Juliet, who wrote light articles for women during World War II is in search of a series story to write when she unexpectedly receives a letter from a man in Guernsey relating to a book she used to own that he has come into possession of. He writes to her of the Guernsey Literary and Potato Peel Pie Society and, intrigued by the notion, Juliet asks more questions, which then begin to be answered by the various members of the society.
As the story progresses, Juliet’s desire to meet all of the people she has been corresponding with grows and eventually she does make it to Guernsey where the story shifts slightly, but remains as charming as the start.
While it took me a while to get into this book and the letter writing style, once the characters began to develop their own distinct voices, it was a quick and delightful read. If you’re looking for a light-hearted read, this is a great book to pick up.
4 out of 5 stars.
(And I’m so glad I can now tell my friend that I have read the book and enjoyed it!)