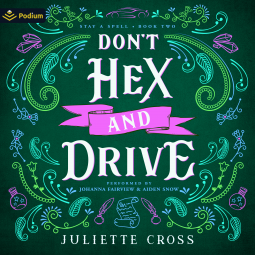 I received a copy of the Don’t Hex and Drive audiobook from Netgalley in exchange for a fair and honest review. All thoughts and opinions are my own.

Notoriously bad at peopling, Isadora Savoie spends most of her time in the greenhouse or at the local animal shelter, using her Conduit powers of growth and healing.

Content to remain in the background of the Savoie sister shenanigans, she’s reluctantly roped into the mystery of missing neighborhood girls. Now, she’s partnered with a flashy, flirty vampire to find them before it’s too late.

Devraj Kumar has seen and done it all. Three hundred years roaming the Earth as a Stygorn – a legendary vampire warrior who operates in the shadows – has its perks. But ennui has set in. That is, until he has a run-in – literally – with an intriguing witch while on a new assignment in New Orleans. Fascinated by her resistance to his charms, Devraj can’t help but push her buttons in an effort to get to know the shy witch. Fortunately for him, she’s been recruited by the Lord of Vampires to assist Devraj on the case.

Between a Bollywood marathon, supernatural dating app, secret package, and sexy driving instruction, Isadora is in over her head. And Devraj? After just one taste, he’s playing for keeps.

Last year I had the privilege of reviewing Don’t Hex and Drive by Juliette Cross in ebook form, and when I was offered the chance to review the audio, I couldn’t say no (especially after the awesome performance in the first book, Wolf Gone Wild.)

Don’t Hex and Drive is the paranormal romance story following witch, Isadora Savoie, and vampire, Devraj Kumar. When Devraj accidentally hits Isadora (on her bike) with his car, he’s immediately contrite and unexpectedly attracted to the reclusive witch. In town to investigate the disappearance of young women from New Orleans’ bars, Devraj finds himself seeking out Isadora as their paths cross during the investigation.

This is my second time reading the book and it was every bit as good as I remembered, and just as steamy. (Invest in a good fan.)

The audiobook is phenomenal. After the performances of Johanna Fairview and Aiden Snow in Wolf Gone Wild, I knew we would be in good hands. They perfectly capture the characters of Isadora and Devraj (and many of the side characters, too). Their performance is so good that it almost didn’t feel like the same two narrators from the first book, but it was just as good, if not better.

The audio is a fantastic way to read this story, and will be released early in July.