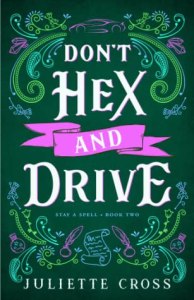 I received a copy of Don’t Hex and Drive from Netgalley in exchange for a fair and honest review. All thoughts and opinions are my own.

Notoriously bad at peopling, Isadora Savoie spends most of her time in the greenhouse or at the local animal shelter, using her Conduit powers of growth and healing. Content to remain in the background of the Savoie sister shenanigans, she’s reluctantly roped into the mystery of missing neighborhood girls. Now, she’s partnered with a flashy, flirty vampire to find them before it’s too late.

Devraj Kumar has seen and done it all. Three hundred years roaming the earth as a Stygorn—a legendary vampire warrior who operates in the shadows—has its perks. But ennui has set in. That is, until he has a run-in—literally—with an intriguing witch while on a new assignment in New Orleans. Fascinated by her resistance to his charms, Devraj can’t help but push her buttons in an effort to get to know the shy witch. Fortunately for him, she’s been recruited by the Lord of Vampires to assist Devraj on the case.

Between a Bollywood marathon, supernatural dating app, secret package, and sexy driving instruction, Isadora is in over her head. And Devraj? After just one taste, he’s playing for keeps.

I was first introduced to Juliette Cross’ books through her podcast, Smart Women Read Romance, and I read the first book in the Stay a Spell series, Wolf Gone Wild earlier in the year and loved it. Not only did it include all my favourite paranormal romance creatures – vampires, witches, werewolves – but it was also set in New Orleans, a city I’d really love to visit one day.

Don’t Hex and Drive is about Isadora Savoie, a witch with the abilities of a Conduit – growth and healing – who’s content to stay in the background and avoid the hustle and bustle of people. While riding home one evening, she’s hit by a car containing the new-to-town vampire, Devraj Kumar – a Stygorn vampire warrior. She’s annoyed and he’s intrigued and what Isadora thought was a chance encounter she could forget easily vanishes when it turns out he’s her new next-door-neighbour, here to solve a local case of missing girls.

The first thing I can say about Cross’ writing is that it’s just plain fun. It’s not overly complicated, but it’s enjoyable and that’s what drew me in and kept me reading this book in one sitting over a few hours. Being familiar with some of the side characters made it easier to just return to the lives of the Savoie sisters and this time get some insight into the vampire culture Cross is building up within the Stay a Spell world.

I can relate a lot to Isadora – an introvert who’s happy to keep doing the things she loves, and avoid the things she doesn’t (like driving). But she’s also fiercely loyal to her family, and good at the jobs she does for them. She’s not a heroine in need of saving, rather someone who needs help to push her outside her comfort zone just a little.

Devraj is a delightful alpha hero – hundreds of years old and weary from his life as a soldier, he’s beginning to contemplate slowing down and finding somewhere in the world to settle. He’s deeply fascinated by Isadora and loves to make her laugh and smile, and he begins to wonder if New Orleans is that place he could call home. He brings with him those hundreds of years of experience, as well as the Indian culture he was raised in (which translated into a lot of delicious descriptions of food that made me hungry while reading). I love how nuanced Cross made him, with a backstory of being a Bollywood actor – which gets used a lot in this book to tease Isadora – while also being this revered shadow-y vampire soldier.

I also really enjoyed the mystery sub-plot to the story of the girls going missing. We know from the outset that the New Orleans vampires believe that a rogue group of vampires are responsible and so they begin the process of trying to hunt them down. It’s not meant to be the main thread of the narrative,  rather a reason for Devraj to be in town and for him to work alongside Isadora (as well as give us insight into the vampires) and in that way it works a lot more like a cozy mystery – which is great, because I do enjoy a good cozy mystery. Coupled with witchy business and vampires and I’m all set.

There are hints throughout this book about future storylines and couples and I cannot wait!

One Reply to “Don’t Hex and Drive Review”