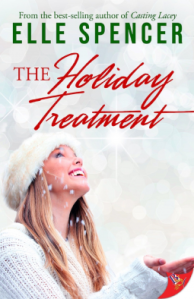 I received a copy of The Holiday Treatment from Netgalley in exchange for a fair and honest review. All thoughts and opinions are my own.

By day, Holly Hudson’s a story editor for Wifetime Network. By night, she’s the writer for the network’s very cheesy, very straight holiday romance series—Christmas in Evermore. Holly took the job to accomplish exactly one thing: a gay Christmas movie. She’s been shot down before, but things start to look up when Meredith Drake unexpectedly moves into the network’s holiday division.

On the heels of a brief (but totally hot) fling, Holly and Meredith agree to keep things professional now that they’ll be working together. Especially since the network has a strict policy about workplace relationships. Instead, they vow to channel their passion into a pitch for the network’s first Christmas movie to feature two female leads.

In this contemporary romance, Holly and Meredith work to make the Yuletide gayer while discovering that happy endings aren’t only for the movies.

The Holiday Treatment is a fun, sapphic holiday romance that follows Holly Hudson, a story editor for the Wifetime Network’s Christmas movie division. Every year she helps to produce a successful – straight – holiday romance for the masses, when what she really dreams about is writing a gay Christmas movie that her younger self (and her present-day self) would love to see on the screen. After being shot down (again), Holly takes her customary trip to Hawaii for the holidays only to cross paths with Meredith Drake, one of the producers at her network. They have a brief and steamy fling that fizzles when they return to reality as Meredith takes on the role of Holly’s new boss. Vowing to keep their relationship professional and to make Holly’s gay Christmas dreams a reality, the two struggle with their new dynamic.

This was a fun and easy to read holiday story. Holly is a likeable character who’s trying to find a way to make her dream a reality while also trying to balance out her own personal struggles.

I loved a lot of elements in this story:

Holly’s friends who live in her apartment complex. She spends a lot of time with them and they’re a big part of her life and the story. They meddle, commentate and advise her on her love life and they were just a fantastic addition.

I also really enjoyed Holly’s backstory – we get to meet her parents when she visits her hometown (a town that markets itself on the Christmas holidays!) and it’s all very adorable. I wish we’d spent more time there, because it was so charming.

One thing I did struggle with was the resolution of the conflict. There’s a ‘grand gesture’ towards the end of the book, and while I’m normally good with a big, grand gesture, this one didn’t come with the level of grovelling you would probably expect to see, given the extent of the betrayal? To me, it felt a bit rushed.

Overall, it was enjoyable, but I would have just liked a little more depth.