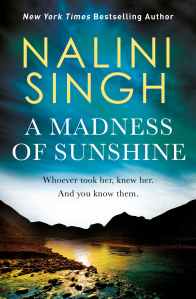 I received a copy of A Madness of Sunshine from Netgalley in exchange for a fair and honest review. All thoughts and opinions are my own.

Welcome to Golden Cove, a remote town on the edge of the world where even the blinding brightness of the sun can’t mask the darkness that lies deep within a killer…

On the rugged West Coast of New Zealand, Golden Cove is more than just a town where people live. The adults are more than neighbours; the children, more than schoolmates.

That is until one fateful summer – and several vanished bodies – shatters the trust holding Golden Cove together. All that’s left are whispers behind closed doors, broken friendships, and a silent agreement not to look back. But they can’t run from the past forever.

Eight years later, a beautiful young woman disappears without a trace, and the residents of Golden Cove wonder if their home shelters something far more dangerous than an unforgiving landscape.

It’s not long before the dark past collides with the haunting present and deadly secrets come to light.

Over the last two years I’ve read a lot of Nalini Singh’s work, across both her urban fantasy/paranormal romance and contemporary romance series. When it was announced that she was going to be releasing thriller/suspense novel, I was intrigued to see what it was like.

A Madness of Sunshine is set in a coastal town in New Zealand. Anahera is returning home after the death of her husband, leaving behind a successful pianist career in London and his husbands pregnant mistress. Anahera returns to a town that’s both familiar and changed – all the people from her childhood are still there, living the lives their built in her absence – and the ghosts of a series of unsolved missing persons cases that plagued the town. When a popular local teen goes missing, it dredges up all the past fears of the town and it’s up to Anahera and Will, the local detective, to unravel the mystery of what has occurred and if there’s a connection to the past unsolved crimes.

A Madness of Sunshine is deeply atmospheric read; the small town comes through as a really strong character in its own right, and is highlighted by its isolation and location against a rugged coastline. What helps build this atmosphere is Anahera’s connection to her hometown and the memories that are slowly revealed as the story progresses.

Anahera was also an interesting character with a striking storyline – the death of her husband and the reveal of his mistress sends her running back to a place she never thought she would return to and this sets up the tone for the whole book. She’s a woman fighting her past but unsure of where her future will take her.

Alongside Anahera’s story, we also meet Will, the outsider in the town – a police detective with an almost spotless record sent to a small town to keep him out of the way for reasons we learn as we get further into the story. Will hasn’t earned the trust of the entire town, yet, but once he begins the search for the missing girl, the entire town bands around him as they try to bring one of their own home.

Singh’s first foray into the mystery genre is a solid start. It’s got atmosphere in spades, but suffered a little from inconsistent pacing. I suspect that the more she writes in this genre, the stronger her storylines will be, and overall it was a great way to spend an afternoon on the couch reading until I had the answers to the mystery.