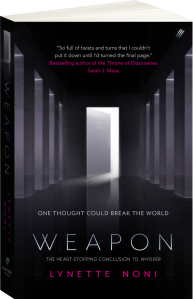 I received a copy of Weapon from the publisher in exchange for a fair and honest review. All thoughts and opinions are my own.

I already knew he was a psychopath. But now?

He’s more dangerous than ever.

And I have less than twenty-four hours to stop him.

After escaping Lengard and finding sanctuary with the Remnants, Alyssa Scott is desperate to save those she left behind — and the rest of the world — from the power-hungry scientist, Kendall Vanik. But secrets and lies block her at every turn, and soon Lyss is left questioning everything she has ever believed.

When long-lost memories begin to surface and the mysteries of her past continue to grow, Lyss battles to retain her hard-won control. Allies become enemies and enemies become allies, leaving her certain about only two things: when it comes to Speakers, nothing is ever as it seems . . . and the only person she can trust is herself. 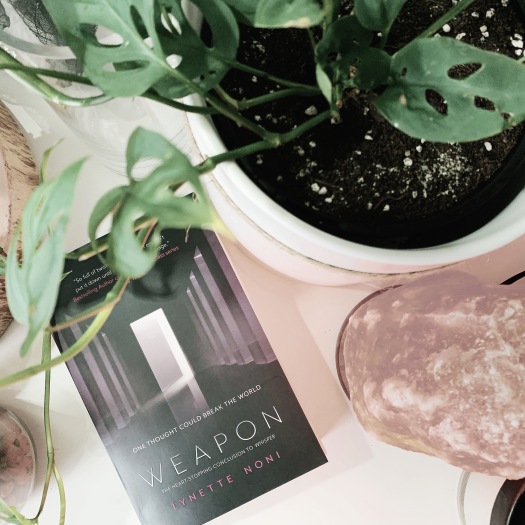 I’ve been a huge fan of Lynette Noni’s work since I first picked up Akarnae a few years back, and eagerly binge-read what was (then) currently available to read from the series. Her writing is clear and easy to read, and while it may not always be the most complex or literary-style of writing, she more than makes up for it in her characters who steal the limelight anyway.

I was fortunate to receive an early copy of Whisper, the first book in Noni’s new sci-fi inspired duology, before it’s release, a story about a girl who’s been held captive and experimented on. A girl who doesn’t speak. I enjoyed Whisper a lot because it has a lot of classic young adult dystopian tropes woven through it and a strong female lead who needs to find her way.

That story continues in Weapon, and while it’s hard to talk about the concluding book in a series without spoilers, I’ll do my best.

Weapon picks up immediately after the events at the end of Weapon. In hindsight, I probably should have reread the first book before picking Weapon up as it did take me the first sixty-seventy pages to really remember what had happened and who was who. Noni refers to a lot of the previous events, but doesn’t really go into any big recaps, so if you’re feeling like you need a refresher before I hand, my advice would be to reread the first book. That said, once the action picked up, I was all aboard for the fun ride that is Weapon.

We begin with Alyssa outside of Lengard, surrounded by new allies who are helping her to discover her newfound freedom once she recovers for her injuries. We spend a lot of time with new and old characters, learning about the dynamics between the new characters as Alyssa herself learns about the people around her. Determined to save her friends and shut down Lengard after the trauma and grief it caused her, Alyssa injects herself into a mission to save a newly discovered Speaker, and that’s where we start to get out first new plot twists and intrigue for this book.

What Noni does incredibly well in this book is turn everything we know on it’s head. Alyssa is told, more than once, that not everything is as it seems, and it’s something important to remember as a reader, too, especially since our perspective is through Alyssa’s eyes. From the moment Alyssa goes on her first mission, she begins to question everything and her tenacity as a character to follow through on her gut instincts that she doesn’t know everything – even when she’s got goals she’s determined to meet – is what makes her an intriguing YA female lead.

Despite having a whole host of side-characters, I don’t feel we ever spent enough time with anyone in this book to truly develop them  in such a way that I connected with them as a reader (with the exception maybe being Smith). This is definitely the Alyssa show, and there’s nothing wrong with that.

The world was set up in the first book, so the world building in Weapon was purely to expand on the foundations we already had. Being somewhat familiar with the locations, in Sydney, where the story takes place did make it a lot easier to work out where the characters were at any given point in time, and I even learnt something about The Rocks, which was a nice touch.

The highlight was definitely the ending reveal (or reveals?) and the surprises just kept coming the whole way to the end. There’s a satisfying conclusion, too, which leaves enough for the reader to think about without being so open-ended that you feel like nothing’s wrapped up.

Overall, this was a really fun afternoon read and I look forward to seeing what Lynette Noni writes next.