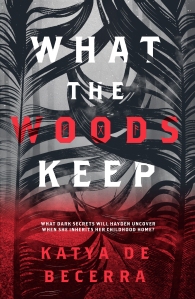 I received a copy of What the Woods Keep from the publisher in exchange for a fair and honest review. All thoughts and opinions are my own.

Katya de Becerra’s stunning debut combines mystery, science fiction, and dark fantasy in a twisty story that will keep you mesmerized right up to the final page.

On her eighteenth birthday, Hayden inherits her childhood home – on the condition that she uncover its dark secrets.

Hayden has tried to put the past behind her, and so far it’s worked. She’s getting ready for college, living in a Brooklyn apartment, and hanging out with her best friend and flatmate, Del. But now it’s all catching up with her: her mother’s mysterious disappearance a decade ago, her father’s outlandish theories about a lost supernatural race, and Hayden’s own dark dreams of strange symbols and rituals in the Colorado woods where she grew up.

As soon as Hayden arrives at her hometown, Del in tow, it begins: neighbours whisper secrets about Hayden’s mother; the boy next door is now all grown-up in a very distracting way; and Hayden feels the trees calling to her. And among them, deep in the woods, Hayden will discover something incredible – something that threatens reality itself.

What the Woods Keep is an enthralling, edge-of-your-seat magical-realism/thriller that keeps you guessing.

Hayden’s just turned eighteen and inherited her family’s old manor and her childhood home. She hasn’t been there since her mother disappeared before her eighth birthday, and her missing mother has left a set of conditions to be followed. Hayden, and her best friend and roommate, Del, leave their Brooklyn apartment to travel to Promise, a town with secrets and strange happenings. There, Hayden must confront her past, her mother’s history, and the research her estranged father is doing into the supernatural.

This was a thrilling read. I picked it up and expected to get through a few chapters and put it down and come back to it later. But, a few hours later I was frantically turning pages to find out what on earth was going on. There are so many twists and turns and strange events that it was hard to predict exactly where the story was going. What was always clear, however, was a threat to Hayden and the people she cared about, from the deeply atmospheric setting to the creepy locals living in Promise, to the disturbing events that continued to occur around Hayden.

Hayden is a young woman who’s experienced childhood trauma, been accused of violent acts and been in therapy and on and off medication for nearly a decade of her life. She’s finally broken free of her past and is trying to make a new life for herself as she gets ready for college, but the lure of finding out what happened to her mother pulls her back to Promise, and the strange mystery surrounding the woods.

It was also refreshing to have such a strong female friendship from start to finish between Hayden and Del. Their opposite (or maybe that should be complimentary) personalities allowed for great conversations and counter-balancing, and the steady shift of their individual beliefs over the course of the story was fascinating. Likewise, it was also refreshing to have a romance subplot that was less insta-love and more like a rekindling. (Although I do wish we spent more time getting to know the present-day Shannon.)

I love the German and Norse mythology woven through the story, and the way you’re kept guessing as to whether or not their are supernatural elements at play, especially given Hayden’s highly practical nature.

Katya de Becerra has clearly spent a lot of time researching every element of this story, beginning with the little bits of information given at the start of each chapter on various scientific theories or processes that inform what’s to come in the story, and leading all the way up to the mythology that underpins the town of Promise.

If you’re looking for a smart, edge of your seat young adult story, What the Woods Keep is definitely for you. I hope there’s more to come, because this was just a fabulous read.