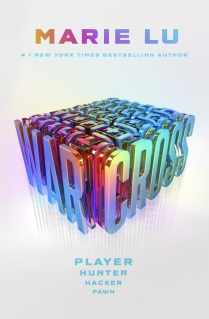 Title // Warcross
Author // Marie Lu
Publication Date // October 2017
Publisher // Penguin
Readership // Young Adult
Genre // Speculative Science-Fiction
Rating // ✭✭✭✭⭐︎
synopsis.
From #1 New York Times bestselling author Marie Lu – when a game called Warcross takes the world by storm, one girl hacks her way into its dangerous depths.
For the millions who log in every day, Warcross isn’t just a game – it’s a way of life. Struggling to make ends meet, teenage hacker Emika Chen works as a bounty hunter, tracking down players who bet on the game illegally. Needing to make some quick cash, Emika takes a risk and hacks into the opening game of the international Warcross Championships – only to accidentally glitch herself into the action and become an overnight sensation.
Convinced she’s going to be arrested, Emika is shocked when she gets a call from the game’s creator, the elusive young billionaire Hideo Tanaka, with an irresistible offer. He needs a spy on the inside of this year’s tournament in order to uncover a security problem . . . and he wants Emika for the job. Emika’s whisked off to Tokyo and thrust into a world of fame and fortune that she’s only dreamed of. But soon her investigation uncovers a sinister plot, with major consequences for the entire Warcross empire.
In this sci-fi thriller, #1 New York Times bestselling author Marie Lu conjures an immersive, exhilarating world where choosing who to trust may be the biggest gamble of all.
(Good Reads)
review.
Warcross is a fast-paced, futuristic adventure led by a diverse cast in a setting outside of the U.S.
Emika Chen has fallen on hard times – her rent is due, she’s got a crap job, no money, and she’s about to be evicted from her apartment. To bring in extra cash, she hunts down people exploiting the world’s obsession, Warcross, a virtual reality game that has people everywhere hooked. When a bounty hunt goes wrong, she risks everything to hack the opening ceremony of the international Warcross Championships to make up the money she needs, accidentally glitching herself into the action by accident. Instead of having her arrested, the game’s creator hires her to bounty hunt for him – inside Warcross. She becomes a player in the Championships, a cover for her real job of tracking down a mole disrupting the game.
Warcross is just plain fun – it’s everything I look for in an entertaining book: interesting characters, action scenes and a few explosions. The writing style is not overly sophisticated, there probably could have been some strong editing, and the love story could have been put aside for a mutually respectful friendship, but ultimately, I wasn’t reading for those things.
I’m not a gamer, and a lot of those references go over my head, but this felt like an adventure. It felt high stakes (at least during the game portions) and I loved it. Emika Chen, rainbow hair and all, is a great, tough character who’s trying to stand on her own after her father’s death; she knows what she’s good at, and she’s also a good person.
I wish we’d gotten to know the Phoenix Riders – Emika’s Warcross team – a little better, but the story is told in first-person and so we see and know only what the main character does. Hopefully in future books she’ll open up more to those new friends she’s made and we’ll get to know them, too.
While Warcross wasn’t perfect (and probably didn’t live up to the hype for me), it was still great fun to read it!
4.5 out of 5 stars.

One Reply to “Player, Hunter, Hacker, Pawn: a Warcross review”