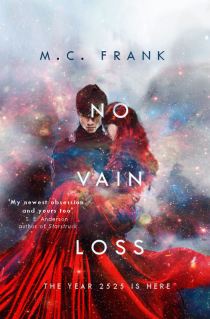 Title // No Vain Loss (No Ordinary Star #3)
Author // M.C. Frank
Publication Date // November 25, 2017
Publisher // Independent
Genre // YA, Science-Fiction
Rating // ✭✭✭✭✭
synopsis.
A soldier is summoned to the North Pole, days before the year changes, told to fix the great Clock for a celebration. He has no idea what to do.
A girl, hunted for the crime of being born, almost dies out on the ice. She is rescued by the last polar bear left alive.
A library waits for them both, a library built over a span of a hundred years, forgotten in the basement of an ice shack.
The world hasn’t known hunger or sickness in hundreds of years. It has also forgotten love and beauty.
This is the One World.
The year is 2524.
Inspired by the short stories of Ray Bradbury, this futuristic young adult novel in three parts is set in a world where Christmas -among other things- is obsolete and a Clock is what keeps the fragile balance of peace.
Written in three parts, this is the breathtaking story of how two unlikely people change the world, and each other, one book at a time.
In No Vain Loss, the world is on the brink of the greatest war humanity has ever known. Lives will be lost. New truths will be revealed.
(Good Reads)
review.
No Vain Loss is the action-packed conclusion to the No Ordinary Star trilogy by author, M.C. Frank.
Felix and Astra have been tasked with protecting a world that has long-since forgotten how to feel and how to love. They, themselves, have been caught up in the political games of this futuristic world and are struggling to find their place within it in a way that left me, as a reader, on the edge of my seat.
Felix, an unwavering soldier, and Astra, a young, fiery woman, have come such a long way over the course of the three books. Their character development has been fantastic, as well as the development of their relationship which feels real and unforced. The world they inhabit feels fully realised – and I can tell you, it’s a future world that I wouldn’t want to live in, but made for a compelling story.
M.C. Frank wove so much suspense, intrigue and heart into her series that it’s easily one of the most interesting book series I’ve read this year. There were twists and turns, most of which I didn’t see coming. The underground continues to be one of the things I love most about the books, for all the secrets it has revealed and still holds even at the conclusion.
I gave No Vain Loss 5 out of 5 stars. It will be released on November 25, 2017.

I received a copy of No Vain Loss from the author in exchange for a fair and honest review. All thoughts and opinions are my own.