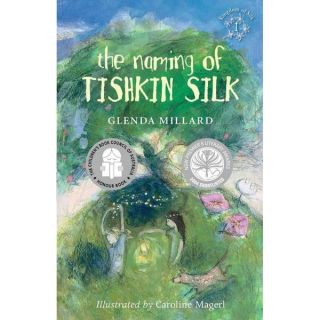 Title // The Naming of Tishkin Silk
Author // Glenda Millard
Publication Date // 2003
Publisher // ABC Books
Genre // Junior Fiction, Australian
Rating // ✭✭✭✭✭
synopsis.
Griffin Silk is an uncommon sort of boy, from an uncommon sort of family. The warm, loving home he shares with his father, grandmother and five big sisters (The Rainbow Girls) is marked by the aching absence of his mother and baby sister. Where have they gone and will they be coming home again? When Griffin starts school and meets Princess Layla the answers to his questions gently start to unfold.
This unique, tender novel will captivate young readers and adults alike, with its warmth, honesty and beauty.
(Good Reads)
review.
The Naming of Tishkin Silk is as heart-warming as it is heartbreaking.
Griffin Silk is the second-to-youngest child in his family, with five older sisters who are nicknamed the Rainbow Girls. He lives with his sisters, his father and his grandmother, Nell, in a house surrounded by a beautiful landscape. His mother and youngest sister, Tishkin, aren’t with them, but every day Griffin hopes for their return, especially when he starts at his new school and finds himself in situations he’s never been in before. Until he meets Princess Layla, and the two strike up a beautiful friendship.
There are so many things to love about The Naming of Tishkin Silk, the first being Glenda Millard’s beautiful writing. She captures the voice of young Griffin so well, moving from the childlike to the poignant in the way only children can be and as a reader, I felt like I was three with Griffin as he tries to find the answers he’s looking for. The characters were spot on: the sadness and the hope that they all have was clear. Nell was a wonderfully magical grandmother – the rock for the family – and Ben, Griffin’s father, is trying to keep the family unit together. The Rainbow Girls were bright and cheerful, and all of them welcomed Layla into their lives.
There’s something enchanting about books like this: whimsical tales telling stories about sad truths and reality that grip readers and keep them wanting more. The Naming of Tishkin Silk will tug at your heart-strings (you might even cry) in a good way. This beautiful tale goes such a long way to explain and how you keep going after tragedy.
I gave The Naming of Tishkin Silk 5 out of 5 stars.