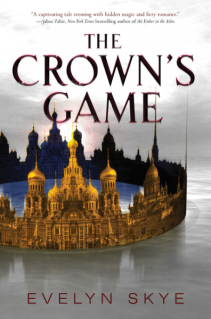 Title // The Crown’s Game (The Crown’s Game #1)
Author // Evelyn Skye
Publication Date // May 2016
Publisher // Harper Collins
Genre // Young Adult, Magical Realism
synopsis.
Vika Andreyeva can summon the snow and turn ash into gold. Nikolai Karimov can see through walls and conjure bridges out of thin air.
They are enchanters—the only two in Russia—and with the Ottoman Empire and the Kazakhs threatening, the tsar needs a powerful enchanter by his side. And so he initiates the Crown’s Game, an ancient duel of magical skill. The victor becomes the Imperial Enchanter and the tsar’s most respected adviser. The defeated is sentenced to death.
Raised on tiny Ovchinin Island her whole life, Vika is eager for the chance to show off her talent in the grand capital of Saint Petersburg. But can she kill another enchanter—even when his magic calls to her like nothing else ever has?
For Nikolai, an orphan, the Crown’s Game is the chance of a lifetime. But his deadly opponent is a force to be reckoned with—beautiful, whip smart, imaginative—and he can’t stop thinking about her.
And when Pasha, Nikolai’s best friend and heir to the throne, also starts to fall for the mysterious enchantress, Nikolai must defeat the girl they both love . . . or be killed himself.
As long-buried secrets emerge, threatening the future of the empire, it becomes dangerously clear . . . the Crown’s Game is not one to lose.
(Good Reads)
review.
The Crown’s Game was a book so steeped in magic and wonder that it took my breath away. It’s one of those books that even now that I’ve finished it, and read many other books since, I still find myself coming back to it, thinking about it and marvelling at the enjoyment I got from reading it.
Set in Russia, the tsar requires an enchanter by his side to help combat the growing unrest from the Ottoman Empire and the Kazakhs. Traditionally, the magic of Russia finds its way back into the individual who will become the enchanter for the crown, however, on occasion, the magic divides itself among two worthy enchanters, at which point The Crown’s Game must be enacted to identify the worthiest enchanter. The Crown’s Game is an ancient magical duel – that pits one enchanter against another.
What I loved most about this take on a ‘duel’ was that Evelyn Skye opted to have her main characters – Vika and Nikolai – battle it out in truly specular magic. Neither one truly attempts to kill the other with their magic, but rather showcase the almost unlimited possibilities that their magic can create. (And, most of their magic was breathtaking.)
I also loved the differences between these two main characters – both firmly believe that they have the right to be the tsar’s enchanter, and yet, as the game progresses we see them evolve. I would have liked to have seen more character development – but given that it is the first book and the second one is due to be released soon, I’m hoping for more of that development in the second book. I enjoyed the competition between Vika and Nikolai as they not only tried to out-do one another with individual feats of magic, but eventually create something magical alongside one another.
There was a love-triangle (or love-square) that develops in this first book, but it wasn’t overplayed and thus, I can forgive it. The twist that came at the end made for a great change of pace and cliff-hanger ending that I didn’t predict at the start.
I gave The Crown’s Game 4.5 out of 5 stars. A fabulous, magical read!