BOOK INFO
Title: Country Roads
Author: Nicole Hurley-Moore
Publisher: Allen & Unwin
Price: $29.99 AUD
Genre: Fiction
SYNOPSIS
A compelling tale of betrayal, tragedy, healing and love that proves first impressions aren’t always right.
Rebecca Duprey is working day and night to keep the family sheep station, Bluestone Ridge, afloat. But Bec’s father, who’s been in a wheelchair since a farming mishap, keeps second-guessing her decisions. Now, to add Bec’s woes, her unfaithful ex-boyfriend has started lurking around, and the adjoining farm she’d hoped to buy has been snapped up by a guy from the city called Matt Harvey.
After leaving his job in advertising, Matt became a bestselling novelist. But since the death of his fiancée in a car accident, he’s had severe writer’s block and is desperately hoping his move to the country will help him deal with his grief and allow him to focus on completing his next book. Problem is, he seems to have started off on the wrong foot with his new neighbour, Bec Duprey.
Bec isn’t quite sure when she started feeling attracted to Matt, but she’s determined not to succumb to his charms. And Matt isn’t sure when his feelings changed about Bec; all he knows is he can’t get her out of his mind. Can Bec and Matt overcome their fear of loss to find love and happiness with each other…?
BOOK REVIEW
Country Roads is a contemporary romance novel set against a rural Victorian backdrop. It evokes the small, country town feel, where everyone knows everyone else and the rumour mill has a tendency to run rampant.
White Gum Creek is a farming town, recovering in the wake of drought. Farmers are trying to keep their farms afloat in hard times, hoping for the wetter seasons to bring respite. Some of the farmers are holding off on much-needed purchases to upgrade needed farming tools, others are selling off land, and others still are trying to maintain the visage of a perfectly running farm. The town itself is close-knit, with many of its inhabitants being ‘locals’ while affectionately adopting the ‘blow-ins’ who moved to the area and stayed.
Bec Duprey works on her family’s farm, Bluestone Ridge, in the aftermath of an accident that has left her father wheelchair bound. Despite the fact that Bec runs the farm on a day-to-day basis, living and breathing the work, her father, Jack, still holds tight to the financial and decision-making reigns, unable to let them go. Bec, herself, finds herself becoming incredibly frustrated with the inability to make decisions or purchases that will aid her in running the farm and increasing the output.
Matt Harvey is a Melbourne-born writer who moves to White Gum Creek, purchasing a small parcel of land on the property neighbouring Bluestone Ridge. He’s escaped city living after a car accident that killed his fiancé and left him injured and stuck with writer’s block.
Bec and Matt have a tough introduction to one another: not only has Matt bought land Bec and her father intended to purchase to expand their farm, but Matt has no clue about country living and this causes him to butt heads with the fiery Bec initially. With the aid of friends – new and old – the two eventually overcome the initial iciness in a heartwarming story of taking chances as both characters have to find ways to open themselves up to new opportunities despite personal histories that might not otherwise incline them to.
I loved the characters in this story – except for the ones that you’re not supposed to like, and for good reason. They’re real and honest and hard-working. Nicole Hurley-Moore has crafted a group of friends for both her main characters that are warm and funny and make you want to join in their conversations. Each one was well-developed, and with Bec and Matt it was easy to sympathise and hope for the best outcome for them both. We see the characters at their lowest points and their highest and the main story wraps up beautifully, leaving me with a sense of great satisfaction.
Of course, there are some other characters and stories that I’m just dying to know about, too, that are on the periphery to the main narrative.
Country Roads is an easy, enjoyable read, perfect for curling up on the couch one afternoon.
4 out of 5 stars.
BOOK CREDIT
Country Roads by Nicole Hurley-Moore is published by Allen & Unwin, RRP $29.99, available now.
AUTHOR SOCIAL MEDIA
Twitter: @nhurleymoore
Facebook:  facebook.com/nicole.hurleymoore.author
Website: nicolehurley-moore.com 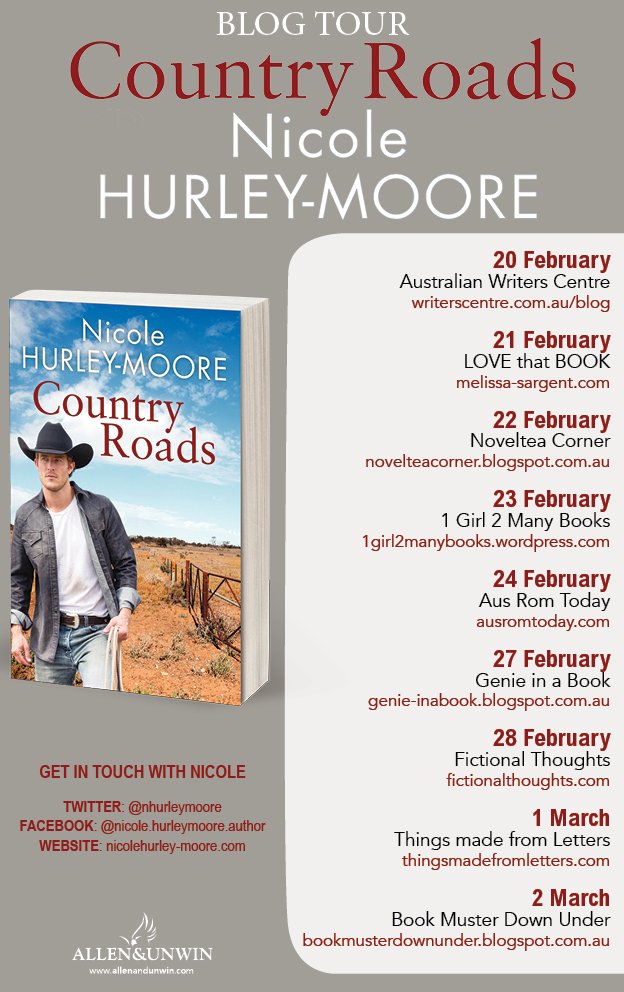