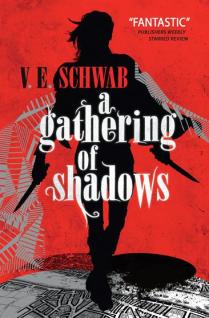 Title // A Gathering of Shadows (Shades of Magic #2)
Author // V.E. Schwab
Publication Month // 2016
Publisher // Titan Books
Genre // Fantasy
synopsis.
It has been four months since a mysterious obsidian stone fell into Kell’s possession. Four months since his path crossed with Delilah Bard. Four months since Prince Rhy was wounded, and since the nefarious Dane twins of White London fell, and four months since the stone was cast with Holland’s dying body through the rift–back into Black London.
Now, restless after having given up his smuggling habit, Kell is visited by dreams of ominous magical events, waking only to think of Lila, who disappeared from the docks as she always meant to do. As Red London finalizes preparations for the Element Games–an extravagant international competition of magic meant to entertain and keep healthy the ties between neighboring countries–a certain pirate ship draws closer, carrying old friends back into port.
And while Red London is caught up in the pageantry and thrills of the Games, another London is coming back to life. After all, a shadow that was gone in the night will reappear in the morning. But the balance of magic is ever perilous, and for one city to flourish, another London must fall.
(Good Reads)
review.
A Gathering of Shadows is the second book in the fantasy series, Shades of Magic by V.E. Schwab (you can find my review for the first book here). As such, I won’t go into too much detail of the plot because there are spoilers if you haven’t read the first one.
It is rare when the second book in a series blows the first one out of the water, especially when the first book was so good. A Gathering of Shadows is set four months after the events at the end of A Darker Shade of Magic and we pick up with the ramifications of the magical events that took place. Red London is preparing to host the Element Games – an event that showcases the magical talents of individuals from three neighbouring countries for entertainment.
Kell’s standing within Red London is precarious in this book as some view him as the source of the events that took place and mistrust him, including the Crown. Lila disappeared as she always intended and we follow her story among a group of privateers. Along with Kell and Lila’s POV chapters, Schwab has also included chapters from Rhy’s POV, which is fantastic, because the Prince is now more heavily involved in the plot and he is a nice contrast to Kell. These chapters also help to further develop the bond the two men have as brothers.
This book is much more character driven. Most of the action takes place in the last 150 pages or so, while the rest of the book really develops the characters and where they are mentally, which was really fascinating. The world building is still incredible and Schwab proves there’s always more to reveal about the different Londons and their connections to one another. We’re introduced to new side-characters who play their part in further developing both plot and character.
The Element Games were a really intriguing aspect of this book, and we learn about them from multiple perspectives – Kell and Rhy who’ve experienced them before, and Lila who’s never experienced them and is thus learning everything for the first time, which provides an easy entrance point for readers.
Overall, it was a wonderful real, with a beautiful, slow burn lead-up to the final showdown that left me devastated. I cannot wait until the third book is released at the end of February to find out what happens next.
5 out of 5 stars.

One Reply to “Book Review | A Gathering of Shadows”

Leave a Reply to Utopia State of Mind Cancel reply