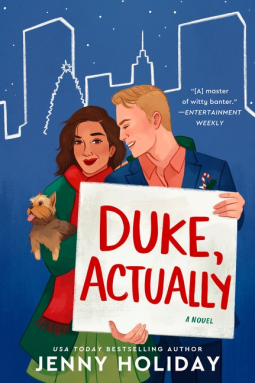 I received a copy of the Duke, Actually from the publisher and Netgalley in exchange for a fair and honest review. All thoughts and opinions are my own.

USA Today bestselling author Jenny Holiday follows A Princess for Christmas with another delightful contemporary Christmas romance between a playboy baron and a woman who has said goodbye to love.

Maximillian von Hansburg, Baron of Laudon and heir to the Duke of Aquilla, is trapped. Under pressure from his domineering father, he must marry a suitable bride before he inherits a title that feels like a prison sentence. In New York to meet a prospective wife, he ditches his responsibilities and appears on Dani Martinez’s doorstep. He’s been intrigued by the no-nonsense professor since he met her at the Eldovian royal wedding and is determined to befriend her.

Newly single Dani is done with love—she even has a list entitled “Things I Will Never Again Do for a Man”—which is why she hits it off with notorious rake Max. He’s trying to escape relationships, and she’s resolved to avoid them at all costs. All they want from each other is friendship and a distraction from their messy lives.

As their bond begins to deepen, so does their attraction, until they end up in bed together. Falling in love was never part of the plan—Max’s family doesn’t see Dani as a perfect match, even as his heart tells him she’s the one, and Dani isn’t sure she can make it in Max’s world. Can they find the courage to live they life they desire, even if it means risking everything?

I knew absolutely nothing about this book before picking it up as part of the Bonkers Romance podcast’s Temple of Deviant Joy Book Club, except that it was a contemporary romance with a Duke?

As it turns out, it’s contemporary romance with a Duke with a lot of Christmas references and it was actually a lot of fun. A touch dramatic at times (but that’s kind of par for the course with a lot of romances) but I was very pleasantly surprised at how much I enjoyed it.

Max, the heir to a small European Dukedom, ends up befriending Dani who’s single and after her husband for a divorce since he left her for a former (college) student of theirs. Max and Dani met after their friends, a Crown Princess and a cab driver from New York, met, fell in love and decided to get married. This leaves Max in a tough spot – he was previously going to marry Prince Marie in a mutually convenient arrangement – and together he and Dani decide to support each other in moving on in their lives.

Their friendship is heartwarming, and often cheesy, but a whole lot of fun. It’s clear that they don’t initially know what to make of each other, but Max is incredibly loyal to the people he cares about and worms his way into Dani’s good graces by being a nice guy. Meanwhile, Dani’s friendship helps Max to begin to confront his own insecurities about his future and the path he might have to take.

There were some great supporting characters – Princess Marie and Leo (the couple from the first book in the series – as well as Max’s younger brother, Seb, Dani’s colleague and and friend, as well as Dani’s dog (also called Max, or Maximus Minimus, so we don’t get confused). While we don’t spend a lot of time with them, their presence moves the story along and helps us understand the protagonists.

Something to be aware of is the relationship between Max and his parents. Max’s father, the Duke of Aquilla, is an alcoholic and there are discussions around the physical abuse he inflicted on his children while they are young, as well as the mental abuse they endure as adults. Their father is not above scheming to get what he wants, while Max and Seb are hoping to move their family firmly into the twenty-first century.

There’s a lot of travel between New York and Eldovia, and lots of fun adventures in between. It’s a fairly light read, and with all it’s Christmas references, perfect for reading in December.