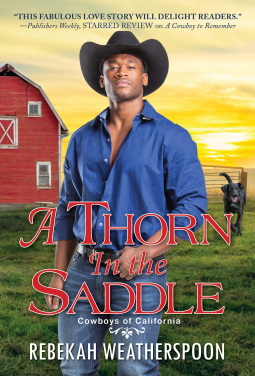 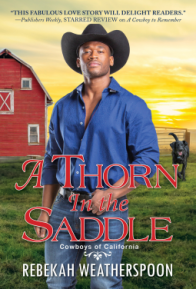 I received a copy of the A Thorn in the Saddle from Netgalley in exchange for a fair and honest review. All thoughts and opinions are my own.

Set on a Black-owned luxury dude ranch with a fairy tale twist, the third Cowboys of California romance from award-winning author Rebekah Weatherspoon captivates with a modern take on Beauty and the Beast, as a brawny rancher and a brainy beauty find themselves in a beast of a predicament…

Ranch owner Jesse Pleasant always felt too big for his desert town—literally—and too brutish to fit in with his charming, cowboy brothers. After his temper gets the best of him one time too many, he’s ready to accept the truth: he’s cursed to be alone. But when the Senate selection committee comes looking for a man of his public standing, he knows this might be his chance to prove to his family and friends that he can keep his cool, all while giving back to his community. There’s only one problem. While Jesse definitely has a mind for business, his people skills are more than lacking.

Former tech consultant Lily-Grace Leroux has had it up to her hat with hot-tempered men who think they know what’s best, especially a big headed rancher set on keeping her widowed father from dating his grandmother. But after Lily-Grace learns of Jesse’s softer side during a painfully awkward showing at a community date auction, one thing becomes clear; while Jesse Pleasant is not ready to run for public office, he might be ready for love. Against her better judgement and despite their rocky start, Lily-Grace warms to the sparks flying between them. She never dreamed they would build their own connection, one destined for its own happily ever after . . .

A Thorn in the Saddle  is the third book in the Cowboys of California series by Rebekah Weatherspoon, and although you can read it as a standalone (like I did), I suspect it probably reads a little smoother if you’re familiar with the previous two books. That said, there’s a pretty good recap in the first chapter that gives you an overview of the main players and how everything connects together.

Jesse is the oldest brother, the rock of the family, holding together the family ranch when his childhood crush, Lily-Grace, returns to town and tells him off for scaring her father (who happens to be courting his grandmother). When Jesse is entered into a local charity auction, Lily-Grace comes to his rescue to ‘purchase’ him and the two begin to rebuild a relationship together.

This was pretty fun. Admittedly, it’s not my favourite Rebekah Weatherspoon book, but it is a solid read. I enjoyed the dynamic between Jesse and Lily-Grace – Jesse is working through some anger management issues and his inexperience in the bedroom, and Lily-Grace is a willing bedroom teacher (sex lessons are always fun in a book). Lily-Grace is also working through her own issues. She returned home after quitting her job and leaving her partner, only to discover that her partner is unable to leave her alone.

There’s clearly a close knit family dynamic in this book and series as Jesse’s family embrace  their extended family and celebrate a wedding in the first part of the book. The supporting characters were fun and dynamic, but there are a lot of them to keep track of, so that’s something to keep in mind if you have trouble with that.

Something I haven’t seen in a book before is the inclusion of a specific skin condition – vitiligo. Lily-Grace has the condition, where she loses pigmentation in areas on her skin. It’s mentioned throughout the story, but never in a way that makes it or her seem other. I actually didn’t realise that this was the name of the condition so it was interesting to spend some time reading about it to find out more after finishing the book.

This is a solid read, and one that anyone who enjoys big family romance books might enjoy.