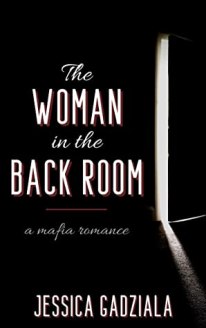 I received a copy of The Woman in the Back Room from the author in exchange for a fair and honest review. All thoughts and opinions are my own.

He hadn’t planned on being a part of the Family.
Life had thrown a curve at him at a young age that made him reevaluate his path in life.
And he chose out.
But when tragedy strikes, awakening the need for revenge, he finds himself wanting back in.
To the Family.
The life.
The people.
Including a woman he never could have seen coming, one he never would have thought he’d want in his life.
Until he found her there.
Now he can’t imagine a life, a home, or a future without her around.
But enemies could be found in the unlikeliest of places, threatening everything he never knew he wanted, and the very woman he only just discovered he needed…

The Woman in the Back Room is the second book in the Costa Family series – and if you’re wondering if you can read it without having read the first book, I am proof that you can. (Although I will be going back to read the first book because I enjoyed this one a lot.)

Santiago Costa made the decision to leave the Family years ago, and focused on his young family. He never intended to become a young family, but for the sake of their son, Santi and his wife stayed together until she’s killed out the front of their home. This sends him back to  the Family in order to seek revenge for his son’s mother. Enter, Alessa Morelli, the daughter of the Morelli family who can’t seem to find acceptance as an equal, because she’s a  woman. She’s ‘volunteered’ to help babysit Santi’s son, Avi – and what starts as an annoying job for her to do, turns into something she becomes increasingly invested in.

This book combines some of my favourite romance tropes – slow burn, forced proximity and single parent – and weaves it into a very compelling read. Santi is a reluctant member of a mafia family, while Alessa is doing everything she can to prove herself to her own, and both of them come together as they care for Avi.

Alessa was a standout for me in this book because she is battling a lot of prejudice for being a woman (on top of being an illegitimate daughter) in a world dominated by men. But working for Santi gives her the opportunity to prove her skills and her worth more than once, and her persistence and her courage is what draws Santi to her.

The biggest surprise in the book was Avi – he was an utter delight. Children can sometimes be hit or miss in romance books, but his story as a young boy who’s lost his mother, doesn’t have a strong connection to his father, and who finds a companion in the woman looking after him was really great.