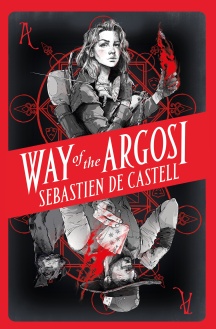 I received a copy of Way of the Argosi from the publisher in exchange for a fair and honest review. All thoughts and opinions are my own.

The Alchemist meets The Three Musketeers – with card tricks. A brilliant origin story of adventure, wit and philosophy to enrapture devotees as well as newcomers to the Spellslinger series.

Ferius Parfax has a simple plan: kill every last inhabitant of the spell-gifted nation that destroyed her people, starting with the man who murdered her parents. Killing mages is a difficult and dangerous business, of course, but when she meets the inimitable and extraordinary Durrall Brown she discovers that physical strength is not the only way to defeat evil of all kinds.

So Ferius undertakes to study the ways of the Argosi: the loosely-knit tribe of tricksters known for getting the better of even the most powerful of spellcasters. But the Argosi have a price for their teachings, and by the time Ferius learns what it is, it may be too late.

Perfect for fans of The Dark Tower, Firefly, Guardians of the Galaxy, Terry Pratchett, Ben Aaronovitch and Jim Butcher.

A few years back I requested a review copy of a book I had very little understanding of based purely off the incredible cover art that resembled stunning playing cards. That was the first book in the Spellslinger series (aptly titled Spellslinger). Since then, I’ve continued to read each book in the series and I couldn’t resist picking up Way of the Argosi.

This is a prequel novel, giving us the backstory on possibly my favourite character in the series, Ferius. When we first meet her in this book, she’s very different to the character we first meet. She’s young, her people have been massacred and she’s been kidnapped, tortured with magic, and left to fend for herself as the result of a horrible magical experiment. She’s left with a desire to take her revenge on the perpetrators until she crosses paths with a strange man, Durrall Brown – perhaps the first person who doesn’t give up on her. From Durrall, she begins to learn the ways of the Argosi.

This was a really engaging read for a lot of reasons.

First up, Ferius is – and always has been – one of my favourite characters, and one of the most intriguing. When we first met her in Spellslinger, she was the one dispensing the advice to the hero of that book, and here, she is the one in need of guidance and support. She’s angry and beaten, but not yet broken, and in the face of great adversity, she persists. There’s a huge amount of character growth in this first part of her story (I am assuming there’s going to be at least one more book based on the ending) and all it’s done is increase my interest in finding out more about her.

Ferius is a loner for the majority of the book – people surround her but can’t get close to her, the result of the magical experimentation by the Jan’Tep mages who kidnapped her – until Durrall Brown is drawn into her orbit. From then on, he insists that she can be free of what has been done to her, and helps her figure it out. It’s not the easiest path to travel and there’s plenty of hiccups along the way, including a fascinating imprisonment scene, but the banter and interplay between the two characters is delightful.

What makes this book even better is the inclusion of artwork inside the book. The artwork are representations of the cards the Argosi travel with, and each piece of artwork is followed by a description of the meaning behind the card, which in turn highlights the theme of the upcoming chapter. As a very visual person, I appreciate it, because the artwork is amazing.

As usual, Sebastien de Castell managed to hook this ‘not-a-fantasy-reader’ reader into another fantastic reading experience.