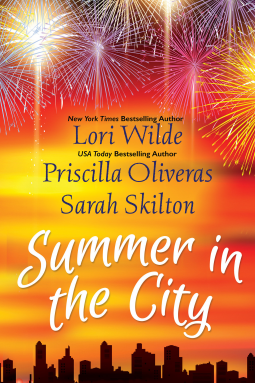 Title: Summer in the Citythr

I received a copy of Summer in the City from Netgalley in exchange for a fair and honest review. All thoughts and opinions are my own.

Each connected novella in this fun, fresh Rom-Com anthology follows a different woman from a group of NYC friends whose plans to escape the summer heat with a fabulous girls-only weekend suddenly lose steam when an unexpected blackout cuts off power to all of Manhattan. But while the lights are out, enemies become lovers, acquaintances find they have more in common than a pack of matches, and the city really heats up!

There’s nothing like summer in Manhattan. The days are long and the nights are even longer. But when the lights go out in the city, fireworks explode…

Night at the Museum by Lori Wilde
Art restorer Ria Preston knows a thing or two about beauty. And when she discovers her neighborhood crush, gregarious Wall Street advisor Vic Albright, is stuck overnight in the Metropolitan Museum of Art with her, she can’t resist taking him on a very private tour…

Lights Out by Priscilla Oliveras
Back in high school, Vanessa Ríos and Mateo Garza were theater troupe rivals. Now Mateo’s a rising Broadway star and Vanessa’s his most scathing critic. Cue a plot twist straight out of central casting: the two end up alone in his New York City apartment during the blackout, setting the stage for what could be their second act romance . . .

​Mind Games by Sarah Skilton
What happens in college stays in college–unless you never get over it. In fact, Alison has been waiting to take her revenge on Nick, once the hottest guy on campus, now the hottest guy on the rising magician’s circuit. But her plans to sabotage his first show are upended by the power outage. That’s when the real magic happens…

Summer in the City is a delightful collection of three contemporary romance novellas set during a blackout in New York City. Each novella is connected  by the three heroines who are friends and about to head out of the city for a weekend girls’ trip until the blackout sidelines that and they are confronted with the opportunity for romance.

Night at the Museum is a fun story of art restorer, Ria, who’s been seeing a very attractive man around the town, but hasn’t worked up the courage to talk to him yet. Their paths cross at an event at the Metropolitan Museum of Art, where she is showcasing a recent restoration. After a night of flirting, she offers him a tour of the restoration department, and while they’re downstairs, the lights go out and the two decide to throw caution to the wind.

This story had a lot of heart – Ria is clearly a woman devoted to both the artwork she restores and the art of her job of restoring. Her connection to the painting she’s showcasing is what draws in Vic and us as a reader.

Lights Out  was probably my favourite of the three novellas, and is the romance between a theatre critic (Vanessa) who’s out to review the most recent show by talented Broadway star, Mateo. Having known each other since high school, she has previously given him a scathing review on one of his shows, but when they find themselves stuck together in the middle of the blackout they’re both forced to confront their feelings and misconceptions of one another.

This one was just plain fun from start to finish – there’s a lot of tension that’s pre-exisiting between the two characters, but there’s also shared culture and love of theatre and the willingness to admit to being wrong and to reconcile their differences. It was also very hot. My favourite image from the story was when Mateo carried Vanessa on his back five blocks after she injured herself.

Mind Games was a close second favourite and possibly should have come out on top, but a few little aspects didn’t work for me. It’s the second-chance romance between Alison and Nick who had been college sweethearts until Alison discovers something that Nick’s been working on that is deeply offensive to her. Years later, she turns up to a performance he’s given, auditioning for the lead magician role at a hotel determined to ruin his performance.

I loved the magic elements in this story – Nick is a very sex magician – and the banter between both Nick and Alison was top notch. I found that the redemption storyline between the two of them didn’t quite work for me as well as it should have. I think, had it been longer and the two had more time to go through the process, it might have been stronger. I know I’d read a full length story between these two.

Overall, the collection was cohesive, fun and engaging. I loved the setting, the characters and the premise. All the authors described the oppressive feeling of NYC in the summertime and made the city itself one of the very prominent characters. It was my first time reading each of these authors and I’m very interested in checking out other titles by each of them.