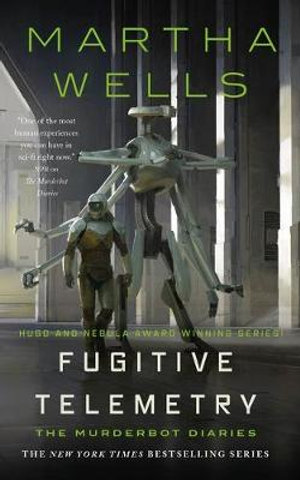 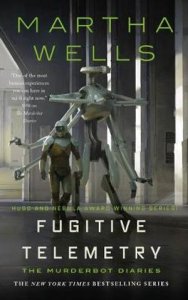 I received a copy of Fugitive Telemetry from Netgalley in exchange for a fair and honest review. All thoughts and opinions are my own.

The New York Times bestselling security droid with a heart (though it wouldn’t admit it!) is back in Fugitive Telemetry!

Having captured the hearts of readers across the globe (Annalee Newitz says it’s “one of the most humane portraits of a nonhuman I’ve ever read”) Murderbot has also established Martha Wells as one of the great SF writers of today.

No, I didn’t kill the dead human. If I had, I wouldn’t dump the body in the station mall.

When Murderbot discovers a dead body on Preservation Station, it knows it is going to have to assist station security to determine who the body is (was), how they were killed (that should be relatively straightforward, at least), and why (because apparently that matters to a lot of people—who knew?)

Yes, the unthinkable is about to happen: Murderbot must voluntarily speak to humans!

The Murderbot Diaries series is a fairly consistent one as far as I’m concerned, and Fugitive Telemetry is no different. We’ve returned to the novella-length stories for the sixth book and while I’ll always be happy to have a full-length Murderbot story, Martha Wells is fantastic about telling stories in the shorter format, too.

Murderbot is on Preservation Station and discovers the dead body of an unknown human. Having to work alongside Station security is not on Murderbot’s list of fun things to do, but even it acknowledges that it should be fairly straightforward to figure out who this unknown person is, who killed them and why. Right?

It’s pretty easy to say that Murderbot is one of my favourite characters of all time – a former SecUnit that is primarily machine and no longer on a leash, Murderbot just wants to be left alone, and preferably not talk to people. In each book we see Murderbot being thrown into situations that are uncomfortable for it, which encourages some measure of growth, however it’s safe to say that it’s still got a wicked sense of humour and disdain for having to deal with people.

This book is essentially a science-fiction murder-mystery and I am here for it. While we don’t have as many fight sequences as we’ve had in previous books, it’s made up for in rescue attempts, reluctant bonding opportunities for Murderbot and twisting plot that doesn’t reveal its secrets until the end.

Every time I come to a new Murderbot book, it’s like coming home. I know what to expect – high quality writing, engaging characters and a good dose of adventure.