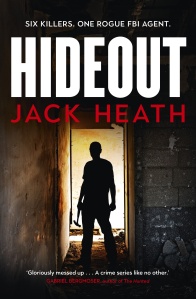 I received a copy of Hideout from the publisher in exchange for a fair and honest review. All thoughts and opinions are my own.

A tense, unputdownable thriller from the author of Hangman.

Timothy Blake has nothing to lose. He’s headed to an isolated house in rural Texas with a hammer in his pocket and murder on his mind. His target is Fred, the ringleader of a criminal empire on the dark web. Once Fred is gone, Blake can disappear for good.

But it turns out that Fred isn’t alone. Five other psychopaths live in the house. They work together and call themselves the Guards. Torture, extortion and death are their business. Blake manages to convince them that he’s one of their online associates. Soon they think he’s a monster, like them. They’re not wrong.

Blake decides to pick them off one by one. But when a Guard is found with a bullet in his skull, Blake realises that someone else in the house may have the same idea – and he might be their next target.

Meanwhile, who are the desperate people chained up in the building behind the house? One of them will change everything . . .

A bloody, twisted roller-coaster of dark action and suspense from the acclaimed bestselling author of Hangman.

Timothy Blake is back in Hideout, the third instalment in Jack Heath’s fantastically disturbing – and captivating – crime series.

Immediately following the events of the second book, Blake is intent on finding and killing the man behind a dark web criminal enterprise. Things quickly become more complicated when Blake confronts Fred only to discover that his target lives with his team. He must integrate himself into their group while pretending to be someone else, and avoid becoming victim to a murderer targeting his suspects.

The thing that I can say about the Timothy Blake series is that it is consistently thrilling. Heath knows how to write an engaging, edge-of-your-seat crime novel that walks the fine line between captivating and all out terrifying.

Blake, as a character, is deeply flawed and the kind of character you’d immediately assume that you wouldn’t like because of his personal preference, and yet he, as a reader, you’re incredibly sympathetic to him. He’s fast-thinking, and yet struggles with his own inner demons while trying to preserve his sense of what’s right and what’s wrong.

In Hideout the tension is taken up a notch as Blake becomes embedded within a criminal ring who’s crimes are touted as justice. He’s forced into staying with people he can’t trust, who don’t know him, and who are on edge because of their own proclivities. A few cleverly added twists and turns of the plot make for a fast-paced and entertainingly dark story.

Hideout is tense, engaging and delightfully disturbing, and I can’t wait to see what happens to Blake next.