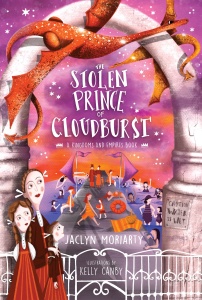 I received a copy of The Stolen Prince of Cloudburst from the publisher in exchange for a fair and honest review. All thoughts and opinions are my own.

A magical tale of mystery and adventure that proves that sometimes even ordinary middle children can be heroes, from the bestselling author of The Extremely Inconvenient Adventures of Bronte Mettlestone and the award-winning The Slightly Alarming Tale of the Whispering Wars.

Long ago, the little Prince of Cloudburst was stolen from the seashore by a Water Sprite. Now, ten years later, the prince has found his way home. The King and Queen are planning the biggest party in their Kingdom’s history to welcome him.

Meanwhile, on the other side of the Kingdoms and Empires, Esther Mettlestone-Staranise is looking forward to another year at Katherine Valley Boarding School. But she arrives to find a number of strange and unsettling changes. For one, her new teacher is rumoured to be an Ogre. Two mysterious students have joined the school, and one of Esther’s classmates is an undercover Spellbinder. Most disturbingly, the mountains surrounding the school – usually a delight of glaciers, teashops, lakes and Faeries – are now crowded with wicked Shadow Mages.

As secrets and dangers escalate, Esther must find the answers to several puzzles. Why is her teacher behaving so oddly? Which of Esther’s classmates is the Spellbinder, and can they really protect the school from gathering hordes of Shadow Mages? Could the Stolen Prince of Cloudburst be connected?

How can Esther – who is not talented like her sisters, nor an adventurer like her cousin, but just Esther – save her family, her school and possibly her entire world?

A few years back I requested a book called The Extremely Inconvenient Adventures of Bronte Mettlestone from Allen and Unwin for a few different reasons: its’ striking title, the author, and the whimsical cover design. Since then, I’ve had the good fortune to read and review both of the first two books, and now, the third in the Kingdoms and Empires series, The Stolen Prince of Cloudburst.

This is the story of Esther Mettlestone-Staranise, a young girl about to enter Year 6 at the Katharine Valley Boarding School where she’s attended all her life. But this year things are a little different. She has a new teacher, whom everyone loves, but is just a little bit odd, and who never seems to think Esther does enough. Not only that, but there are Shadow Mages on the loose, and their target appears to be Esther’s school, and with the guardian out of commission, Esther takes it upon herself to save her school from subsequent magical attacks.

What follows is a story that intertwines with one that began years ago (and has been touched on in previous books). Esther’s story continues to unravel along a parallel path with that of the return of the Prince of Cloudburst who was stolen as a child and is about to be welcomed home finally. But how does it all fit together?

Well, you’ll just have to read the book to find out!

Jaclyn Moriarty returns us to the world of Kingdoms and Empires, where everything is connected and magic and mystery surround everyone. She brings us familiar faces, such as Bronte, and introduces us to new ones: Esther, her friends, sisters and parents, along with familiar places.

I’ve been out of my middle grade reading for a little while so it took a bit of time to get back into the world, but I was hooked by Esther’s story and the mystery surrounding what is happening at her boarding school. Esther is a very enthusiastic young girl who loves school and is proud to be successful at it, too. That is until the new year begins and her new teacher seems less than impressed with Esther’s efforts. Regardless, Esther continues to do her best and comes up against many roadblocks.

After discovering that the school is concerned about an influx of Shadow Mages, she also finds out that a student has been sent to the school to protect it – a student with strong magic. However, when an accident occurs, Esther tries to step in and protect the school that she loves, even at great risk to herself.

It is this experience that helps Esther begin to realise her true potential.

Moriarty has tapped into  many familiar experiences for children around Esther’s age: school, friends and family and struggling to find your place in the world. This book does include a bullying undercurrent to the story (an adult bullying a child) so be aware of that going into the book and if sharing this with younger readers, be prepared to talk about and unpack that with them. Despite the fantasy setting, Esther’s story is very relatable and middle grade readers should enjoy it.

I spent a lot of the book trying to spot all the references and connections to the two prior books, which in itself was a lot of fun. All of the books could be read as standalones, but it’s definitely a perk to have read them all in order and to be able to identify the cross-over.

The Stolen Prince of Cloudburst is an enjoyable magical romp with mystery enough to keep you wondering how all the pieces fit together.