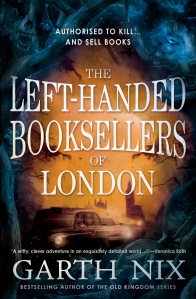 I received a copy of The Left-Handed Booksellers of London from the publisher in exchange for a fair and honest review. All thoughts and opinions are my own.

From the bestselling author of Angel Mage, this new fantasy adventure set in 1980s London follows one girl’s quest to find her father, leading her to a secret society of magical fighting booksellers who police the mythical Old World when it disastrously intrudes into the modern world.

Eighteen-year-old art student Susan Arkshaw arrives in London in search of her father. But before she can question crime boss Frank Thringley he’s turned to dust by the prick of a silver hatpin in the hands of the outrageously attractive Merlin. Merlin is one of the youngest members of a secret society of booksellers with magical powers who police the mythic Old World wherever it impinges on the New World – in addition to running several bookshops, of course! Merlin also has a quest of his own: to find the Old World entity who arranged the murder of his mother. Their investigations attract attention from enemies of the Old and New Worlds. Soon they become involved in an even more urgent task to recover the grail that is the source of the left-handed booksellers’ power, before it is used to destroy the booksellers and rouse the hordes of the mythic past. As the search for the grail becomes strangely intertwined with both their quests, they start to wonder… Is Susan’s long-lost father a bookseller, or something altogether more mysterious?

Garth Nix is an iconic Australian young adult author, one who’s work I’ve read many times over the last twenty years or so – sometimes with more success than others – and I was very excited to be able to read his latest offering, The Left-Handed Booksellers of London. I’d heard it mentioned a few times over the last few months, but didn’t really know much about it before I picked it up and I’m glad that’s how I read it because it let me go on the same adventure as the characters.

Set in an alternate 1983 London, burgeoning art student Susan begins to look for the father she’s never met only to have the first person she questions turn to dust at the hands of the mysterious Merlin, a young man on a journey of his own. Quickly drawn into Merlin’s secret business of magical booksellers, Susan needs to learn as much as she can about a world (the Old World) that intercedes over her own while searching for her father and the answers that could save London.

While we do have chapters from the point of view of both Susan and Merlin in this book, we spend most of our time with Susan who is ‘new’ to this magical world that lies atop the one she knows very well. She’s being initiated into something she doesn’t understand at first and as the reader, so are we, and it’s a good place to start.

Susan is a very practical, no-nonsense kind of character who is desperate to uncover the secrets of her past and to find out who her father is. She’s adept at solving some of the puzzles put before her, but like us, is still missing all of the pieces she needs to do that effectively. By contrast, Merlin is a very out-going character who is very comfortable in his skin. As a left-handed bookseller, he’s a ‘field agent’ of sorts, and often finds himself in dangerous situations. He’s fun and flirty and he genuinely wants to help Susan find answers – even more so when they discover that perhaps their paths are beginning to converge.

There’s a lot to enjoy about this book – there’s adventure and monsters, a deep unabashed love of books and nods to all sorts of myths and legends. As a reader, you can go on the journey without worrying that you need to know a lot about any particular literary reference – you can enjoy it for what it is.

While there were some aspects of the story that were a little predictable, the final twist/reveal at the end was surprising enough that it caught me unaware. This is a book that has left plenty of room for follow-up adventures, but is complete enough on its own to be a satisfying standalone fantasy, which is pretty rare these days.

I thoroughly enjoyed reading The Left-Handed Booksellers of London – hopefully there will be subsequent books so I can revisit these characters, and learn a little more about the ‘magical booksellers.’