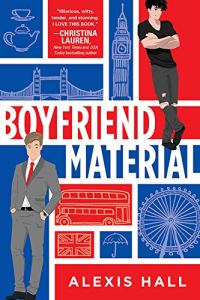 I received a copy of Boyfriend Material from Netgalley in exchange for a fair and honest review. All thoughts and opinions are my own.

Wanted:
One (fake) boyfriend
Practically perfect in every way

Luc O’Donnell is tangentially—and reluctantly—famous. His rock star parents split when he was young, and the father he’s never met spent the next twenty years cruising in and out of rehab. Now that his dad’s making a comeback, Luc’s back in the public eye, and one compromising photo is enough to ruin everything.

To clean up his image, Luc has to find a nice, normal relationship…and Oliver Blackwood is as nice and normal as they come. He’s a barrister, an ethical vegetarian, and he’s never inspired a moment of scandal in his life. In other words: perfect boyfriend material. Unfortunately apart from being gay, single, and really, really in need of a date for a big event, Luc and Oliver have nothing in common. So they strike a deal to be publicity-friendly (fake) boyfriends until the dust has settled. Then they can go their separate ways and pretend it never happened.

But the thing about fake-dating is that it can feel a lot like real-dating. And that’s when you get used to someone. Start falling for them. Don’t ever want to let them go.

I first heard about Boyfriend Material when Kathy (from Kathy Trithardt) reviewed it on her channel earlier in the year and I knew I had to see if I could request a review copy, and hot damn, am I glad I did that. This book is released on July 7th and I loved it so much I preordered a copy of as soon as I finished just so I could read it again in paperback.

Our protagonist, Luc, is the son of two aging, former rockerstars. His father left when he was young and then spent a lot of time in and out of rehab – dragging the family he left behind through the tabloids time and time again. Now in his twenties, Luc is trying to build his own life away from his absent-father’s shadow, but an innocent but compromising photo taken after a night out places his tenuous career in dangerous and he needs to find a ‘respectable’ boyfriend. Fast. Enter Oliver, a straight-laced barrister with ethical views on the world and in need of a fake boyfriend for a future family event. The two decide to fake-date each other for ‘good publicity’ and it’s going great… until feelings begin to get in the way.

There is so much to love about this book, I don’t even know where to begin.

One of my favourite books last year was Red, White and Royal Blue by Casey McQuiston, and Boyfriend Material feels a lot like the grown-up version of that,  but with much more relatable characters. Part of that could be that I am closer in age-range to Luc and Oliver and their friends, but I think there’s a lot to be said for people working every day lives and having struggles that are easily relatable.

It’s easy to fall in love with Luc, who’s definitely down on his luck and a bit of a screw-up, but genuinely doesn’t want the charity he works (supporting dung beetles!) to suffer because of his moderate child-of-famous-people fame. He’s quite negative at the start of the book, but you see him grow so much as a person throughout the book as he begins to realise he can’t continue to live his life the way he always has. At some point he has to start to grow-up and that’s what happens. Is he perfect by the end? Nope, but he doesn’t have to be to grow.

Likewise, Oliver has his own issues to deal with, which are revealed a lot slower, because we don’t get his point of view in this book, which I thought was an interesting choice, but not necessarily a negative one. What we know of Oliver, we learn through Luc’s POV and I think that it worked really well. We learn about him as Luc does. But there’s something about a character who has done really well in his life to prove himself worthy of others, but remains clueless to actually living, and Oliver sits somewhere along that line, doubting his self-worth in a completely different way to Luc.

Then there’s all of the side-characters who are just WONDERFUL. From Luc’s mother, who’s an absolute firecracker, to his friends who help him even when he’s being a pain, to Oliver’s friends who welcome Luc into their lives without question and show both Luc and Oliver that maybe they do fit into one another’s worlds. And those characters aren’t just positive – we also learn about Luc’s father, who tries to regain a foothold into Luc’s life, and we see the impact that has on Luc.

This was just fun and entertaining and an all-round delightful read that I know I will come back to time and time again. If you liked Red, White and Royal Blue but want something a little more adult, then this is the book for you. I can’t recommend it highly enough!