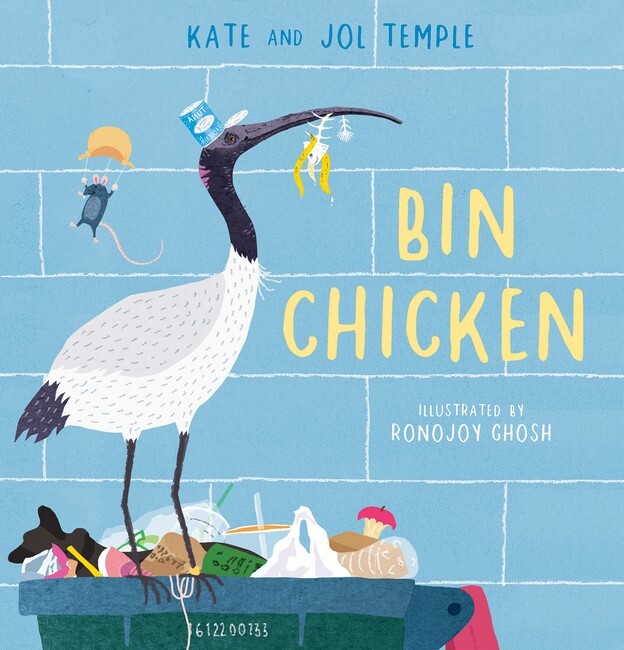 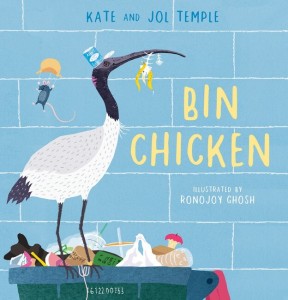 I received a copy of Bin Chicken from the publisher in exchange for a fair and honest review. All thoughts and opinions are my own.

Diving in dumpsters, traipsing through trash! Rummaging through rubbish, making a splash! ‘Revolting!’ they snort, starting to sicken, ‘Trash Turkey! Dumpster Duck! BIN CHICKEN!’ One birds trash is another birds treasure. Find out why the ibis is the queen of the rubbish pile!

There’s something to be said for timing – when I first saw this book and requested it from Scholastic, it was on the heels of a conversation with someone else about what exactly a Bin Chicken was. It seemed a little like fate that there was a picture book being released about it, and I was eager to see what kind of story Kate and Jol Temple would tell. I’ve read a few of their books, including the incredibly precious and heartbreakingly beautiful, Room On Our Rock, and I have to say, they’re very diverse in writing tone!

Bin Chicken is a look at the familiar bird, Ibis, and how it’s adapted to living in an urban environment. In Australia, they’re known as Bin Chickens, often caught foraging in bins for food and other objects. The Temples have taken this little fact and turned it into a story, weaving in the history of these birds – who once lived in wetlands – into a story about how animals can adapt to survive in urban environments.

The story is simple, with enough rhyme to make it sound lyrical and hold the reader’s attention, as Ibis endures the taunts of the other birds for her dumpster diving choices. We also see the fiercely protective side of the mother bird as she cares for her young, too, and how, despite the change in environment and living ‘conditions’ these birds have thrived.

The story, coupled with the lovely illustrations of Ronojoy Ghosh, is a delightfully Australian tale that will inform – and maybe incite a few chuckles – from readers, while opening up a discussion in how animals adapt.