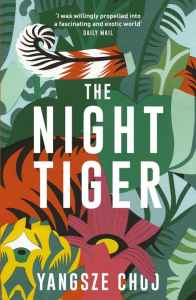 I received a copy of The Night Tiger from Netgalley in exchange for a fair and honest review. All thoughts and opinions are my own.

In 1930s colonial Malaya, a dissolute British doctor receives a surprise gift of an eleven-year-old Chinese houseboy. Sent as a bequest from an old friend, young Ren has a mission: to find his dead master’s severed finger and reunite it with his body. Ren has forty-nine days, or else his master’s soul will roam the earth forever.

Ji Lin, an apprentice dressmaker, moonlights as a dancehall girl to pay her mother’s debts. One night, Ji Lin’s dance partner leaves her with a gruesome souvenir that leads her on a crooked, dark trail.

As time runs out for Ren’s mission, a series of unexplained deaths occur amid rumours of tigers who turn into men. In their journey to keep a promise and discover the truth, Ren and Ji Lin’s paths will cross in ways they will never forget.

Captivating and lushly written, The Night Tiger explores the rich world of servants and masters, ancient superstition and modern ambition, sibling rivalry and unexpected love. Woven through with Chinese folklore and a tantalizing mystery, this novel is a page-turner of the highest order.

A few years back I read a delightful literary novel with elements of magical realism woven into it called The Ghost Bride. I loved the elements of culture that were included and the mystery that drove the story forward. When I saw a copy of The Night Tiger, by the same author available for review, it was kind of hard to resist not requesting it, because I wanted to see if I would love it just as much as I did Yangsze Choo’s first novel.

I’m happy to say that I did enjoy it!

Set in 1930s Malaya, a young boy, Ren,  is gifted to a British doctor as a houseboy upon the boy’s former master’s death. What the doctor doesn’t realise is that the boy has been sent there to reclaim something that belongs to his former master with 49 days or risk his master’s soul lingering on Earth. Alongside this story is that of Ji Lin, a young woman working in a dance hall to pay off her mother’s debts. She comes into possession of something gruesome and Ji Lin and Ren’s paths cross as the threads of the mystery come together.

I will admit that it took me a little while to fully sink into the story, but that usually happens when I try to read something that’s a little more literary fiction (and not genre based) so I wasn’t overly worried. Choo has a fantastic way of describing when and where their stories are taking place and it was a real pleasure just to immerse myself in the location and the culture being depicted.

Both Ji Lin and Ren were compelling characters, each with their own path to walk and their own pasts haunting their decisions. Both characters are very loyal to the people they care about and it came through in various  parts of the story. I came to care deeply about them and that made it hard to put the story down.

I also love how Choo weaves in elements of magical realism, based on cultural beliefs, within their storytelling. It adds a magical element that is very immersive, leaving me wondering, at times, what was true and what wasn’t, and could these night tigers truly exist.

Overall, it was a wonderful reading experience and I’m very glad I picked it up.

4 Replies to “The Night Tiger Review”