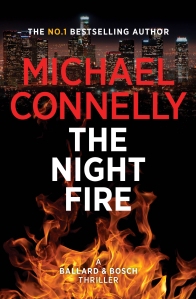 I received a copy of The Night Fire from the publisher in exchange for a fair and honest review. All thoughts and opinions are my own.

Back when Harry Bosch was just a rookie homicide detective he had an inspiring mentor, John Jack Thompson, who taught him to take the work personally and light the fire of relentlessness for every case. Now John Jack is dead and Harry inherits a murder book that Thompson took with him when he left the LAPD 20 years before — the unsolved killing of a troubled young man in an alley used for drug deals.

Bosch brings the murder book to Renée Ballard and asks her to help him find what about the case lit Thompson’s fire all those years ago. That will be their starting point.

The bond between Bosch and Ballard tightens as they become a formidable investigative team. And they soon arrive at a worrying question: Did Thompson steal the murder book to work the case in retirement, or to make sure it never got solved?

I can’t begin to describe how eager I was to read the latest instalment in the Bosch & Ballard team-up that Michael Connelly began last year. The Night Fire is only the fourth Michael Connelly book I’ve read, but I can say that I enjoy his storytelling style and the way he weaves  multiple crime plots into his narrative.

Bosch and Ballard team up again when Bosch comes into possession of an old murder book that his former mentor has left for him. Determined to find out why the murder book was so important, Bosch passes it on to Ballard, who works The Late Shift for LAPD’s Hollywood Division, and they both begin to look into the death of a young man in an alleyway twenty years earlier.  This main mystery is just one part of the story, with both Bosch and Ballard also simultaneously looking into other crimes alongside the main story plot, weaving together a complex and grounded story.

I really enjoy Connelly’s work, but in particular, I enjoy reading about Renee Ballard – a female detective who was forced out of the homicide division after filing a sexual harassment complaint against a superior officer before the events of her first book (The Late Show). Sent to The Late show, the midnight shift, she spends her nights attending crime scenes as one of the divisions only detectives, and her days sleeping on the beach and helping to solve cold cases.

Her relationship with Bosch is a really interesting one. They have a mentor/mentee relationship that’s founded on mutual trust and respect. They trust each other to get the work done and build on each other’s strengths, and I enjoy reading about that.

Another aspect that I enjoyed was, as mentioned earlier, Connelly’s ability to weave in multiple crime stories into the one overarching plot. We get a deep inside look at Ballard’s nightly shift as she investigates an arson incident involving a homeless man, the suicide of a young teen and more. Bosch, too, is looking into the case of judge murdered in the park with the most likely suspect just released from court as a result of Bosch’s investigation.

The way everything came together interesting and not at all what I was expecting. I was engaged from the start and couldn’t put it down until I found out what was going on.