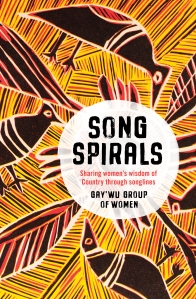 I received a copy of Songspirals from the publisher in exchange for a fair and honest review. All thoughts and opinions are my own.

A rare opportunity to connect with the living tradition of women’s songlines, as recounted by Yolngu women from far north Australia.

Aboriginal Australian cultures are the oldest living cultures on earth and at the heart of Aboriginal cultures is song. These ancient narratives of landscape have often been described as a means of navigating across vast distances without a map, but they are much, much more than this. Songspirals are sung by Aboriginal people to awaken Country, to make and remake the life-giving connections between people and place. Songspirals are radically different ways of understanding the relationship people can have with the landscape.

For Yolngu people from North East Arnhem Land, women and men play different roles in bringing songlines to life, yet the vast majority of what has been published is about men’s place in songlines. Songspirals is a rare opportunity for outsiders to experience Aboriginal women’s role in crying the songlines in a very authentic and direct form.

I’ll admit, from the outset, that Songspirals is a difficult book for me to review. Not because I didn’t enjoy it – quite the opposite, in fact. It’s a deeply insightful and interesting reading experiences that is so far out of my comfort zone that it’s a little difficult to wrap my head around it after just one read. This is going to be a book I come back to over time to unpack in more depth for myself and my own understanding.

Part of my desire to read this book, and what prompted me to request it for review, was my on-going goal to read more books that discuss and unpack Aboriginal Australian culture. It’s something I know a little of, but am always wanting to learn more about because it’s such an important part of my country (both past and present).

Songspirals is a book co-authored and collaborated on by five Aboriginal women and three non-Aboriginal women over the course of a decade that shares and elaborates on five song spirals and the importance that they have to the people and the land where you find them. Many of these songspirals differ between different Aboriginal groups and there is discussion on some of the differences, but the majority of the text shares the songspirals  in both the traditional language and in English before using stories of the author’s experiences to explain the importance and symbolism inherent in each songspiral.

I won’t pretend to have understood it all in my first read – to even hint at that would be disingenuous. Rather, I am now more motivated than ever to learn as much as I can, to begin to understand the importance of the roles of both women and men in bringing songlines to life, as well as the importance of people and place to this amazing culture.

If you are at all interested in the narratives of Aboriginal Australian cultures, this is definitely worth a read as it highlights traditional stories that are not necessarily easily accessible to outsiders and it is deeply fascinating.