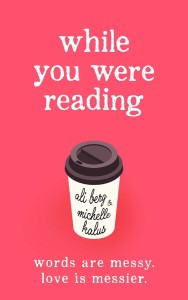 I received a copy of While You Were Reading from the publisher in exchange for a fair and honest review as part of the blog tour for release. All thoughts and opinions are my own.

Words are messy. Love is messier.
A hilarious, insightful new novel from the creators of Books on the Rail

After ruining her best friend’s nuptials, Bea relocates to the other side of the country in search of a fresh start, including meeting new people, living life to the fullest and finally pulling off balayage.

But after a few months, life is more stagnant than ever. Bea’s job is dead-end. Her romantic life? Non-existent. And her only friends are her books, her barista and her cleaning lady.

​Then Bea stumbles across a second-hand novel, inscribed with notes. Besotted with the poetic inscriptions, Bea is determined to find the author … and along the way, she finds herself entangled in one hell of a love quadrangle.

Funny, poignant and insightful, While You Were Reading reveals that there’s no such thing as perfection, the value of true friendship and, most importantly, the power of not living in fiction, but still reading it … Often.

A love story for book lovers that celebrates much more than romance.

There’s something utterly endearing about books with main characters who are complete mess but find solace in books. (Which probably says more about me than I would really like it to!) While You Were Reading is a funny, entertaining story of a twenty-something year old who’s trying to make sense of her life in the only way she knows how.

Beatrix ‘ Bea’ Babbage escapes to Melbourne from Western Australia after she accidentally ruins her best friend’s wedding. Determined to make a new start, she applies herself to her new job, making new friends and living her best life. Only things don’t quite go according to plan – she dislikes her job, has few friends (outside her barista) and her romantic life has accounted to practically nothing. That is until she finds a used book with annotations from its previous owner, and Bea becomes obsessed with trying to track down the person who wrote the beautiful messages inside.

Bea is quite an over-the-top character who embodies many of the insecurities women face today – although I think readers will probably identify with one or two of her problems rather than all of them at once – and that makes her relatable. She wants to make something of her life, but she’s found it hard to get her life together and manage a career, friendships and anything resembling a love life because the ideals she holds internally don’t always match up to reality and that’s a very real problem in modern society. Many times throughout the book she is willingly blind to things going on around her because she doesn’t want to see them (yet) because they don’t fit in with her ideal or plans, and when she does finally open herself up to the opportunities presented to her she often finds herself having to rapidly adjust her understanding to accommodate them – also a very common, modern-day problem – and as a result, she begins to grow as a person.

Being a contemporary novel, there’s quite a bit of romance in this one – including a love quadrangle – but much of the lead up to it is very much part of Bea’s journey of self-discovery and learning to accept that perfection is simply a construct we humans like to torture ourselves with. As readers, we have more insight into what’s going on with Bea and her love interests than she does and that makes for interesting reading and the on-going thoughts of how exactly all this will play out (and how it will all go horribly wrong!).

Berg and Kalus have once again made reading and a love of books the centre of their stories, and it’s delightful, especially as a big reader myself. The literary references dropped the whole way through the book are a lovely nod to fans of reading and the including of a recommended list of books at the end of While You Were Reading is a great starting point for those who are beginning to their literary adventures. This is clearly a love letter to books and to readers and it’s just delightful.

Alongside the bookish references, there’s also a lovely shout-out to Bookstagram and the people who take amazing, book-themed photos. As Bea tries to uncover the identity of the person who annotated the second-hand book she discovers, she uses photos on Instagram to help try and track this person down and it’s always fun to have the added element of multimedia in books and truly helps place While You Were Reading as modern day fiction. The authors are clearly very familiar with social media, how it works and how people connect through it so it never feels forced.

It was also great to have little nods to the authors’ first collaboration, The Book Ninja, in their second book with characters and locations mentioned throughout allowing the reader to identify how the two books fit together in Berg and Kalus’ Melbourne. While you don’t need to read The Book Ninja first, there are little things that will make more sense – like the people commenting on the Bookstagram photo posts – if you’ve read that book. It’s a little detail, but it’s a nice nod to the readers.

Overall, While You Were Reading was a light, easy-to-read contemporary book for adults that will appeal to those of us who’ve grown up in the digital age. It’s definitely a fun, holiday read.