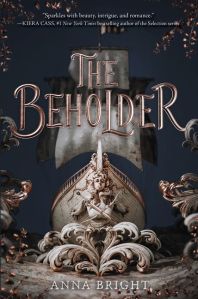 Selah has waited her whole life for a happily ever after. As the only daughter of the leader of Potomac, she knows her duty is to find the perfect match.

But after an excruciatingly public rejection, Selah’s stepmother suggests an unthinkable solution: Selah must set sail across the Atlantic to visit a series of potential suitors—and if she doesn’t come home engaged, she shouldn’t come home at all.

From the gardens of England to the fjords of Norge, Selah’s quest will be the journey of a lifetime. But her stepmother’s schemes aren’t the only secrets hiding belowdecks…and the stakes of her voyage may be higher than any happy ending.

Lush landscapes, dazzling romance, and captivating intrigue await in this stunning alternate historical YA debut—perfect for fans of The Selection or Caraval.

The Beholder is a charming mash-up of a whole host of fairytale and mythological tales woven into an Odyssey-style romance trip around a world that’s kind of like a fantastical version of our world, and I was pleasantly surprised by it.

Selah is the Seneschal-elect, and she’s waited her whole life for a happily-ever-after until a very public rejection leaves her humiliated. When her stepmother suggests an unlikely solution – that Selah sets sail on a tour around the world to court some of the most eligible bachelors – Selah knows that there’s an ulterior motive, especially when it’s strongly hinted she comes back engaged or not at all.

What follows is the beginning of Selah’s journey, beginning with a trip to England, then Norge, while Selah races against time to either find a suitable match or find her people under the rule of her stepmother.

So, The Beholder is a mash-up of so many different stories that shouldn’t work as well as they do together. It’s also a very blatant commentary on the expectation that women must have a man in order to be able to be a successful leader of any community. Selah, herself, is eager to find a husband she loves, but regularly comments on the fact that other people will only take her seriously if she does. Her own eagerness is because she wants a partner (which I can respect) without needing to sacrifice herself or her beliefs to them.

This becomes especially important as she begins to meet the suitors her stepmother has put together – ranging from characters from Arthurian legend and Norse mythology. I found it really interesting how Anna Bright showcase the ‘story’-like perfection of these tales from Selah’s perspective… until one little slip reveals to Selah that nobody is perfect and that what she sees on the surface is not all it seems. She’s then forced to reassess her own understanding and grow as a character, and she undergoes this growth a few times in this first book.

Alongside the suitors, we also have a set of side-characters, the crew of the Beholder, the ship carrying her on her journey. We don’t spend as much time with them in this book, only enough to get hints of who they are and what they’re actually doing (until the end when their purpose is revealed) throughout the book, which ultimately shows just how isolated and alone Selah actually is in her quest.

I was cautiously optimistic about this book, and while it does have some flaws and pacing issues, I was pleasantly surprised. It’s a quick and easy read, if you like romance mixed with retellings. I’m likely to pick up the sequel when it’s released, so that’s always a bonus.

One Reply to “The Beholder Review”