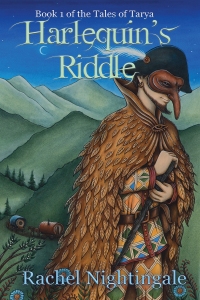 I received a copy of Harlequin’s Riddle in exchange for a fair and honest review. All thoughts and opinions are my own.

The Gazini Players are proud to present
For your Edification and Enjoyment
Tales of great Joy, and of great Woe

Ten years ago, Mina’s beloved older brother disappeared with a troupe of travelling players, and was never heard from again.

On the eve of Mina’s own departure with a troupe, her father tells her she has a special gift for story telling, a gift he silenced years before in fear of her ability to call visions into being with her stories.

Mina soon discovers that the travelling players draw their powers from a mysterious place called Tarya, where dreams are transformed into reality. While trying to solve the mystery of her brother’s disappearance, she discovers a dark secret to the players’ onstage antics. Torn between finding her brother or exposing the truth about the players, could her gifts as a story teller offer a way to solve Harlequin’s riddle?

I wasn’t sure what to expect when I first picked up Harlequin’s Riddle, except that it was a young adult fantasy book written by an Australian author. What I got was a charming tale of the magic of storytelling.

Our protagonist, Mina, leaves her small village to join with a group of travelling players – storytellers of the stage with the ability to make their make-believe characters come alive in a way no one quite understands – following in the footsteps of her older brother who disappeared with a travelling troupe ten years earlier. While learning the ropes, Mina begins to understand that the players draw their creative powers from a place called Tarya – a world where the dreamworld becomes reality. But there’s a cost to the ability to weave dreams into being and Mina becomes caught between trying to uncover the secret of what happened to her brother and revealing the truth about the mysterious powers her companions possess.

As someone who loves to ‘create’ there’s a wonderful underlying story about what happens to people who make things – storytellers, creatives, artists; what happens when inspiration strikes and the rest of the world fades away. This was, perhaps, the biggest drawcard for me as a reader of this book. There’s a magic and mystery to the way Mina’s companions weave their stories and perform for villages that enchants both her and us as readers.

Nightingale also deftly uses mystery to drive the plot forward; as Mina uncovers new information, this in turn leads to more questions that help flesh out the world. It also adds a sinister air to the travelling players performances – we’re never quite sure if they’re telling the truth or not, and because they openly admit to not being able to reveal all their secrets to Mina, we know that something is not quite right.

Overall, this was a pleasant read and a great way to spend a few hours.