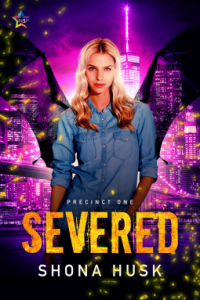 I received a copy of Severed from Netgalley in exchange for a fair and honest review. All thoughts and opinions are my own.

Halle Ish, one of Velli’s elite police Arrows, is shot down during a Precinct One riot. Wounded and unable to fly, she tries to hide and avoid capture, knowing that if she is found by the razor gangs or Clipper Sect they will sever her wings. She needs to get out of Precinct One.

Avin Lent was once a promising medical student, but he started sniffing Mumble to beat the stress and is now the doctor to one of the biggest gangs in Precinct One—while not part of the Clipper Sect, they are just as dangerous. He knows he is only as useful as his next surgery and they would have no qualms about killing him. Only Jarro is keeping him safe.

Jarro Coblic is deep under cover and has been for a year. Immersed in the gang, he suspects his hands will never be clean again. When he finds the wounded Arrow, he knows he can’t turn her over even though everyone is looking for her. With his lover’s help, they hide her and heal her wing. All the while, falling for her. He prays Avin will not crumble and reveal their secret as Jarro tries to figure out a way to get them all out of Precinct One before the Sect and the gangs bring the full wrath of Velli on Precinct One. Tearing the place down can’t come soon enough, but there will be blood before the slate can be washed clean.

Every now and then I start perusing Netgalley for any interesting, upcoming titles. Inevitably I end up with a huge list sitting in my to-review pile (on top of all my other books) but I can’t help it, especially when I come across an intriguing paranormal romance book while searching for books with angels in them (it’s a thing, you know).

Severed is not a long book, but it does set up an interesting world – one where men and women have evolved differently. It’s our world, but not: women have wings and can fly, men don’t. Women live up high, and men live on the ground, bound there without wings of their own. Interactions between the sexes can end up dangerous or deadly, and relationships usually involve two men and a woman as a result.

There are some explanations for all of these things, but for the most part it’s built into the world building and it becomes accepted fact for the story, which begins with Avin and Jarro, two men living together, both of whom work for one of the local gangs. One works as a medic, albeit one with a drug habit, and the other as an enforcer. There are regular riots in their part of town, and the city’s police force often raid their area, using the elite Arrows – women who can fly – as point guards to the attacks. After once such attack, Halle – an Arrow – is injured and discovered by Jarro. Instead of turning her in to his boss, Jarrow enlists Avin’s help to heal her and the two hide Halle in their home, which causes quite a few complications.

I enjoyed the world that Husk built up in this story – it’s very different to what I would normally pick up. Not only is the world complex, but so are it’s characters and I enjoyed the interactions between Jarro, Avin and Halle who are all very different, are all flawed and trying to protect others. The secrets they keep aid in building the tension, but also bring them closer together.

This is a dark, gritty paranormal romance that discusses violence against women, street wars and class hierarchy. I’m very glad to have had the opportunity to read it.