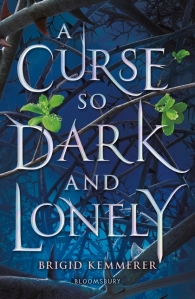 I received a copy of A Curse So Dark and Lonely from the publisher in exchange for a fair and honest review. All thoughts and opinions are my own.

Fall in love, break the curse.

It once seemed so easy to Prince Rhen, the heir to Emberfall. Cursed by a powerful enchantress to repeat the autumn of his eighteenth year over and over, he knew he could be saved if a girl fell for him. But that was before he learned that at the end of each autumn, he would turn into a vicious beast hell-bent on destruction. That was before he destroyed his castle, his family, and every last shred of hope.

Nothing has ever been easy for Harper. With her father long gone, her mother dying, and her brother barely holding their family together while constantly underestimating her because of her cerebral palsy, she learned to be tough enough to survive. But when she tries to save someone else on the streets of Washington, DC, she’s instead somehow sucked into Rhen’s cursed world.

Break the curse, save the kingdom.

A prince? A monster? A curse? Harper doesn’t know where she is or what to believe. But as she spends time with Rhen in this enchanted land, she begins to understand what’s at stake. And as Rhen realizes Harper is not just another girl to charm, his hope comes flooding back. But powerful forces are standing against Emberfall . . . and it will take more than a broken curse to save Harper, Rhen, and his people from utter ruin.

I love a good fairytale retelling, and A Curse So Dark and Lonely is one of the best I’ve read in a while. It’s also the most direct Beauty and the Beast retelling I’ve read, and I really liked that about it. The characters, setting and twists and turns are different, but overall the story has the familiar pattern to it, and there’s something reassuring about it, and I think it helped to ground the fantastical setting, too.

Set in the fantasy world of Emberfall, Prince Rhen has been cursed to relive the same year over and over until he finds a woman who will fall in love with him, becoming a beast that grows with ferocity each time he fails to accomplish the task.

Harper is a young woman from our world, living with cerebral palsy and looking after older brother and dying mother. In a chance accident, while trying to save someone else, Harper finds herself transported to Emberfall and the final chance Rhen has to save himself and his kingdom.

I love how strong a character Harper is – she is tough, determined, and unwilling to bend to Rhen just because he’s a prince and expects people to do as he says (which he soon learns is not the way to Harper’s heart). She’s kind and compassionate, quick and clever, and when she finally comes to terms with the magic-filled Emberfall, she begins to see the plight of Rhen’s people and is moved to help, just as she was moved to intervene and save someone else back in her own world.

The pacing in the story is fantastic; it’s very quick and the story moves along. Harper is transported to Emberfall in the first two chapters of the book – which admittedly, doesn’t give us enough time to develop strong feelings towards her family members, even though Harper herself is fiercely determined to get back to them – and the story doesn’t slow down.

I was impressed by how Kemmerer made the effects of Harper’s cerebral palsy a strength of her character and not a detriment – we have a strong character who deals with who she is every day, isn’t afraid of it, and won’t let anyone else see it as a problem she’s bearing. (Harper tells quite a few people off for looking at her limp as a burden.) It really highlights how being different doesn’t mean worse-off and that’s a message that’s desperately needed in many young adult books.

The world and characters of Emberfall are just wonderful and I was delighted to be able to spend some time exploring them all while reading. I’m definitely going to be rereading this at some point.

One Reply to “A Curse So Dark and Lonely Review”