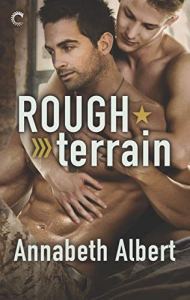 I received a copy of Rough Terrain from the publisher via Netgalley in exchange for a fair and honest review. All thoughts and opinions are my own.

The camping trip from hell may be the first stop on the road to happily-ever-after in Rough Terrain, the final book in Annabeth Albert’s critically acclaimed, fan-favorite Out of Uniform series.

Navy SEAL Renzo Bianchi has a soft spot for Canaan Finley, and not only because the man makes a mean smoothie. He’s the first guy to get Renzo’s motor revving in a long time. But when he agrees to Canaan’s insane charade—one all-access fake boyfriend, coming right up—he never expects more than a fling.

Creating a hot Italian SEAL boyfriend to save face seemed like a good idea…until his friends called Canaan’s bluff. Now he’s setting off into the woods with the very man who inspired his deception, and Canaan is not the outdoorsy type. The sparks are already flying when a flash flood separates them from their group, leaving Renzo and Canaan very much trapped…very much alone in the wilderness.

Working together to come up with a plan for survival is sexier than either of them expects. But back in the real world, being a couple is bringing its own set of hazards…

There’s a comfortably predictability about the Out of Uniform series that keeps bringing me back to read every new book that’s released. We all need those reads that we know we’re going to enjoy and be immersed in, and that’s what Rough Terrain was like for me.

While not my favourite read of the series, it was easy to fall into, with familiar characters – just new leads in Renzo and Canaan – and a new story with a happily ever after… after a whole lot of bumps in the road.

Renzo is a SEAL on the West Coast, but who hails from the East where his family consider him a hero (and would love for him to come home). He’s got plans to transfer back and to be accepted into the Jumpmaster training program, and everything’s going along perfectly until he crosses paths with Canaan – a worker at the local smoothie place who’s easy on the eyes and fun to be around. Canaan’s working while studying nursing after leaving his band former band (he was a drummer) under less than ideal circumstances. He’s being roped back in for a camping trip with his mates, and former ex, and to bring along his ‘boyfriend’… who doesn’t exist.

I don’t mind a bit of the fake boyfriend trope in books – and it was done reasonably well in Rough Terrain. Renzo is quite an uptight character who’s insecure in himself due to his past, but has found some strength in sharing his fitness videos on Instagram. He’s also a nice guy, but his relationship experiences have been strained by his insecurity. Canaan has no such hang-ups which leads to some hilariously awkward conversations between the two of them.

The camping trip is a bonding experience which draws the two of them together – between Canaan’s ex-boyfriend’s deplorable attitude and a situation that leaves Canaan and Renzo stranded and in need of rescue – the two not only begin to unpack their feelings for one another but also their understandings of themselves as people, too.

While not my favourite book in the series, it’s definitely enjoyable and I’m glad I read it. It was nice to have male lead characters dealing with their insecurities and not being ridiculed for it by others.

Now I just need to wait for another Annabeth Albert book…