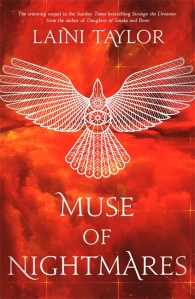 I received a copy of Muse of Nightmares from the publisher, via Netgalley, in exchange for a fair and honest review. All thoughts and opinions are my own.

Sarai has lived and breathed nightmares since she was six years old.
She believed she knew every horror, and was beyond surprise.
She was wrong.

In the wake of tragedy, neither Lazlo nor Sarai are who they were before. One a god, the other a ghost, they struggle to grasp the new boundaries of their selves as dark-minded Minya holds them hostage, intent on vengeance against Weep.

Lazlo faces an unthinkable choice–save the woman he loves, or everyone else?–while Sarai feels more helpless than ever. But is she? Sometimes, only the direst need can teach us our own depths, and Sarai, the muse of nightmares, has not yet discovered what she’s capable of.

As humans and godspawn reel in the aftermath of the citadel’s near fall, a new foe shatters their fragile hopes, and the mysteries of the Mesarthim are resurrected: Where did the gods come from, and why? What was done with thousands of children born in the citadel nursery? And most important of all, as forgotten doors are opened and new worlds revealed: Must heroes always slay monsters, or is it possible to save them instead?

Love and hate, revenge and redemption, destruction and salvation all clash in this gorgeous sequel to the New York Timesbestseller, Strange the Dreamer.

“I read in my spare moments, and by staying up too late.” (Lazlo Strange)

Laini Taylor is a master world-builder, and when I first read Strange the Dreamer, I instantly fell in love with Lazlo, Sarai and the world of Weep. Returning to these much-loved characters and worlds in Muse of Nightmares was an absolute treat for me, because it was like coming home.

Muse of Nightmares begins immediately after the events of Strange the Dreamer – which had shocking consequences for one of the main characters – and without talking about spoilers from the first book, we find out what has happened to everyone since that moment. We also get a dual-timeline story, too – told from the perspective of a new character, but exactly how that storyline fits in with Lazlo and the gang evolves slowly (and beautifully) until both narratives converge for the high-intensity conclusion to Muse of Nightmares.

As mentioned above, Laini Taylor does incredible world building. This time, we spend a lot of time aboard the citadel, learning even more about it as a structure and home, a prison and forbidding presence above the city of Weep. We also learn more about the side-characters from the first book, those left behind in the city after the near-collapse of the citadel in book one, and how those events have caused chaos to the local community.

There are a lot of point of views in Muse of Nightmares, but every one is essential – every character has a story or view to share that adds to the depth of the world and that’s what makes the story so engaging.

Lazlo and Sarai continue to dominate as fascinating characters who’s connection to one another is strong and unbreakable. We also begin to unravel exactly why Minya is the way she is and what led to her choosing the path she has taken and she has all the complexities of a character who makes you question whether you feel anger for her choices or sympathy for the reasons why.

Once I picked up this book, I couldn’t put it down and I know that it’s going to be a book I revisit again (along with the first) because it’s so well-crafted and lyrically written that it’s a joy to escape into this world.