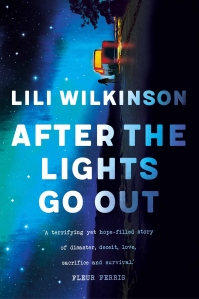 I received a copy of After the Lights Go Out from the publisher in exchange for a fair and honest review. All thoughts and opinions are my own.

What happens when the lights go off after what might truly be an end-of-the-world event? How do you stay alive? Who do you trust? How much do you have to sacrifice?

Seventeen-year-old Pru Palmer lives with her twin sisters, Grace and Blythe, and their father, Rick, on the outskirts of an isolated mining community. The Palmers are doomsday preppers. They have a bunker filled with non-perishable food and a year’s worth of water.

One day while Rick is at the mine, the power goes out. At the Palmers’ house, and in the town. All communication is cut. No one knows why.

It doesn’t take long for everything to unravel. In town, supplies run out and people get desperate. The sisters decide to keep their bunker a secret. The world is different; the rules are different. Survival is everything, and family comes first.

I first heard about After the Lights Go Out at Allen and Unwin’s YA Fanfest event in Melbourne in 2017, where Lili Wilkinson was a guest speaker. She spoke about the just-announced story she’d been working on – a story of doomsday preppers and an event that sends the world reeling. She also spoke about learning to make crystal radios and learning emergency field medicine, and to be honest I was sold on the idea, so much so that I’ve been eagerly awaiting this book for nearly 12 months.

Let me tell you: this book does not disappoint.

After the Lights Go Out follows Pru, the oldest child of a doomsday prepper father who’s moved his three daughters out into the middle of the nowhere to train them for the end of everything. They run drills, learn how to defend themselves and a indoctrinated with the knowledge that family comes first. That is, until the power goes out.

What I really appreciated in this book was the way that Lili Wilkinson writes with pace – once you get past the first chapter or two of set-up everything that follows happens for a reason and there’s an intensity that has you turning pages. The story itself is reminiscent of Tomorrow When the War Began (John Marsden) which I read as a young teenager, and yet it’s its own beast, too, weaving in the fear of the unknown and the unpredictability of people’s behaviour beautifully.

Pru is a character who is torn between doing what she needs to keep the peace with her father and being old enough to understand that the life they lead is not the same as other people. She’s fiercely protective of her family, while being compassionate towards other people – something that competes with her ingrained training to obey her father’s rules. There’s wonderful banter between the members of the community, and especially between Pru and Matteo, a newcomer to the town that Pru befriends, and it’s all so very Australian that I felt at home, even when things got crazy.

I also really enjoyed the practicality of everything that happens. There’s a constant flow of cause and effect that grounds the story and aids in that deep-rooted suspense that Wilkinson has created.

This is easily one of my favourite young adult thrillers of 2018.

One Reply to “Review // After the Lights Go Out”