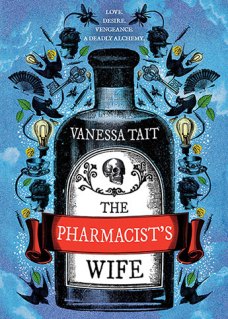 Title // The Pharmacist’s Wife
Author // Vanessa Tait
Publication Date // May 2018
Publisher //Atlantic (Corvus)
Readership // Adult
Genre // Historical Fiction
Australian RRP // $29.99
Rating // ✭✭✭☆
Trigger warnings // Abuse, sexual assault, drug use/addiction
I received a copy ofThe Pharmacist’s Wife from the publisher in exchange for an honest review. All thoughts and opinions are my own.
Synopsis
A dark and thrilling tale of Victorian addiction, vengeance and self-discovery.
Love. Desire. Vengeance. A deadly alchemy.
When Rebecca Palmer’s new husband opens a pharmacy in Victorian Edinburgh, she expects to live the life of a well-heeled gentlewoman. But her ideal is turns to ashes when she discovers her husband is not what he seems. As Rebecca struggles to maintain her dignity in the face of his infidelity and strange sexual desires, Alexander tries to pacify her so-called hysteria with a magical new chemical creation. A wonder-drug he calls heroin.
Rebecca’s journey into addiction takes her further into her past, and her first, lost love, while Alexander looks on, curiously observing his wife’s descent. Meanwhile, Alexander’s desire to profit from his invention leads him down a dangerous path that blurs science, passion, and death. He soon discovers that even the most promising experiments can have unforeseen and deadly consequences…
Reminiscent of the works of Sarah Waters, this is a brilliantly observed piece of Victoriana which deals with the disempowerment of women, addiction, desire, sexual obsession and vengeance.
Review
The Pharmacist’s Wife is one of those books that I’ll admit to being sucked into purely because of its cover. The cover design is gorgeous and foreboding, and as such, an apt introduction to the story itself.
Set in Victorian Edinburgh, Rebecca Palmer is married to Alexander, who opens a pharmacy and begins to experiment and find new medications and treatments. Rebecca believes she’ll live a good life with her new husband until she discovers he’s not who he seems and has secrets of his own that will, ultimately, threaten her life. Alexander pacifies Rebecca’s fears by treating her hysteria with heroin, a wonder-drug he claims will solve all her problems. Thus begins a story of addiction and personal discovery for Rebecca as she tries to survive her marriage.
First up, I want to state that men do not shine very brightly in this particular story – there are men in the story who do respect women and treat them well, but there’s a long time when we don’t see them. Alexander and his business partner, Mr Badcock, are not nice men and they have very low opinions of women, believing everything from menstruation and sexual desire to simple self-confidence is a disease among women that needs to be cured so that men don’t feel uncomfortable. They’re not particularly likeable at all, especially when it’s revealed to be an experiment they want to report on.
Rebecca, however, I found to be a truly intriguing character. She starts off as relatively passive – she follows her husband’s orders (even when she doesn’t want to) and tries to please him in any way she can. She even accepts his medication as a way of trying to make him happy, unaware of the deadly implications of the drug she is taking. There is enough of a rebellious streak in her, however, to seek out a woman, Eva, whom Alexander has warned her off seeing in an effort to uncover the truth about her husband – which is more than which she predicted. She learns to identify her allies, and, eventually, the truth about her husband.
While parts of the story (anything involving Alexander and Mr Badcock) made me so unbelievably angry, that’s the point. The book made me feel all that, all the injustice, and cheer on the female protagonist as she tackles Alexander’s actions head on.
This book won’t be for everyone, but it’s definitely a thought-provoking read. I gave The Pharmacist’s Wife 3.5 out of 5 stars.