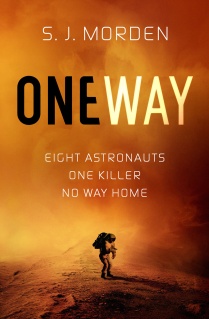 Title // One Way
Author // S.J. Morden
Publication Date // April 2018
Publisher // Hachette
Readership // Adult
Genre // Science Fiction
Rating // ✭✭✭✭
I received a copy ofOne Way from Dymocks in exchange for an honest review. All thoughts and opinions are my own.
Synopsis
A murder mystery set on the frozen red wastes of Mars.
Eight astronauts
One killer
No way home
WE STAND AT THE DAWN OF A NEW ERA Frank Kittridge is serving life for murdering his son’s drug dealer. So when he’s offered a deal by Xenosystems Operations – the company that runs the prison – he takes it, even though it means swapping one life sentence for another.
THERE HAS NEVER BEEN A BETTER TIME TO BE ALIVE He’s been selected to help build the first permanent base on Mars. Unfortunately, his crewmates are just as guilty of their crimes as he is – and he’ll have to learn to trust them if they’re to succeed.
THE FUTURE OF SPACE TRAVEL IS IN SAFE HANDS As the convicts set to work on the frozen wastes of Mars, the accidents multiply. Until Frank begins to suspect they might not be accidents at all . . .
XENOSYSTEMS OPERATIONS: MAKING DREAMS A REALITY There’s a murderer amongst them, and everyone’s a suspect.
Review
One Way by S.J. Morden is an enjoyable science-fiction mystery story.
Mars seems a popular planet to set science-fiction stories on, although this is the first murder mystery I’ve read set on the Red Planet. While I’ll admit it was reasonably predictable, there was enough uncertainty over motives that it kept up the tense pace. Plus, it’s murder on Mars. It’s a pretty interesting concept, given then severely isolated and volatile environment.
My one complaint was the ‘extra’ bits of info including – in between chapters from the main character, Frank, we have transcripts, memos and diary entries from the mysterious Xenosystems Operations, the group spearheading the construction of a permanent Mars base. They were interesting enough, but the order in which they appeared jumped around in time a little bit and it made it difficult to piece together that timeline. (At least it did for me.)
Frank, as a main character, is an interesting one. Swapping one life sentence for another, Frank takes the opportunity to do something with the remainder of his life. He likes being busy and excels in his role. He is, however, a bit of a pushover for most of the book. He doesn’t take the initiative in social situations, preferring to wait and see how he fits into the social structure of his crewmates, almost to his detriment. However, once the accidents begins to mount up, we see that he can be quite dogged in his pursuit for the truth.
Overall, this was a book that held my attention. I wanted to know what was happening and who was behind it and I had all sorts of theories rattling around in my brain. I thought there might have been just a tiny bit ‘more’ in the ending, but it was a fun way to fill a few hours and I’d recommend it to anyone who likes sci-fi mysteries.
I rated One Way 3.75 out of 5 stars.