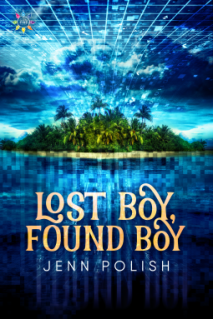 Title // Lost Boy, Found Boy
Author // Jenn Polish
Publication Date // March 2018
Publisher // NineStar Press
Readership // YA
Genre // Science Fiction
Australian RRP //
Rating // ✭✭✭
I received a copy of Lost Boy, Found Boy from Netgalley in exchange for an honest review. All thoughts and opinions are my own.
Synopsis
In a futuristic world, Neverland is a holomatrix, Hook is a cyborg, and Tinker Bell is an automated computer interface.
Peter is desperate to save his lover from a military draft that, unbeknownst to him, Mir volunteered for because they are desperate to be able to fly. So, naturally, Peter programs an entire island—Neverland—as a refuge where Mir can fly without having to fight in a war.
But he doesn’t locate Mir right away; instead, he fights for control of the island with automated interface Tinker Bell, and in his attempts to find Mir, others arrive on the island. But Peter’s single-minded focus on Mir generates repercussions for everyone.
Review
Lost Boy, Found Boy is science-fiction fairytale-retelling with an extremely interesting concept, but falls over a little bit in its execution.
There are some really great LGBTQIA+ inclusions – various characters identify as trans, non-binary, asexual, lesbian and bisexual – and the biggest shame is that the story is not long enough to spend any time developing these relationships further, because they’re utterly fascinating to read.
While most of the characters aren’t all that well-developed, I did like some of the typical ‘Peter Pan’ traits that Peter retained, including a child-like frustration with his world and the fact that he takes his frustrations out on everyone around him, being unable to cope with them himself.
For the most part, while I loved the idea, I found the world building to be lacking substantial depth in order to fully understand the world that these characters inhabit, which in turn is made more difficult to understand because the characters also find themselves immersed within a computer program.
Overall, great concept, I just wish it had been a little more fleshed out on the page. 2.75 stars.