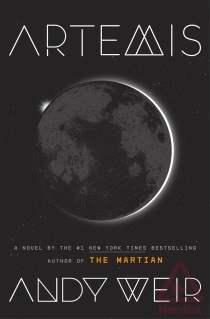 The bestselling author of The Martian returns with an irresistible new near-future thriller—a heist story set on the moon
Jazz Bashara is a criminal.
Well, sort of. Life on Artemis, the first and only city on the moon, is tough if you’re not a rich tourist or an eccentric billionaire. So smuggling in the occasional harmless bit of contraband barely counts, right? Not when you’ve got debts to pay and your job as a porter barely covers the rent.
Everything changes when Jazz sees the chance to commit the perfect crime, with a reward too lucrative to turn down. But pulling off the impossible is just the start of her problems, as she learns that she’s stepped square into a conspiracy for control of Artemis itself—and that now, her only chance at survival lies in a gambit even riskier than the first.
(Good Reads)

In Andy Weir’s new novel, Artemis, everything that can go wrong, does.
Set in the lunar colony, Artemis, we follow the caper of Jazz Bashara – a twenty-six year old smuggler trying to carve out a life and make a buck. When offered a huge payday to sabotage the competitor of a client, the lure of money is too much and Jazz takes the job, only to find herself involved in a much wider conspiracy.
I was so excited for Artemis – The Martian was one of my favourite books of last year, and I absolutely loved Weir’s storytelling style in that book – and yet unfortunately this fell a little flat for me. There were plenty of things that I loved, but just as many things that didn’t work for me as a reader.
Artemis isn’t a bad book – if you like your space-action-adventure novels then this certainly has all of that. There’s a cinematic feel to it, and the way Weir built up the world of the lunar colony felt gritty and real, like it could actually exist. There are as many socio-economic tiers among the many domes that make up Artemis as there are on Earth, and industries are ruled by the nations that immigrated to the moon first and took hold of them. I loved the notion of Moon tourists and the sacredness of the first Moon landing site. I also loved the action sequences (but there’s no surprise there because it’s no secret I love action sequences, the higher the stakes, the better).
Jazz was a real let-down of a character; she felt quite juvenile – which is not a bad thing in and of itself, especially given her circumstances – but I had such a hard time connecting with her. A lot of her comments, behaviour and references were (I believe) supposed to make her appear like a tough and strong female character, but really felt forced. I also felt there were some negative stereotypes being reinforced, in a backhanded way, and that was disappointing.
I wish we got to know more of the side-characters a little better; Jazz was the narrator, and given how self-reliant she was, it made sense that she kept mostly to herself and had a habit of alienating her ‘friends,’ which works as a character trait, but doesn’t really allow for alternative character connections for the reader.
If I wear my for-fun reader hat, it’s not a bad read and there’s definitely enough to keep the casual sci-fi reader engaged. Wearing my more critical hat (which I don’t often pull out), this just pushed a few too many buttons for me to call it a great read. It hasn’t turned me off Weir as a writer – I’m interested to see what he writes next and whether it’s closer to The Martian than Artemis in style. Or maybe something completely different.
I rated Artemis 3 out of 5 stars.

(I received an eGalley of Artemis from Netgalley in exchange for a fair and honest review. All thoughts and opinions are my own.)