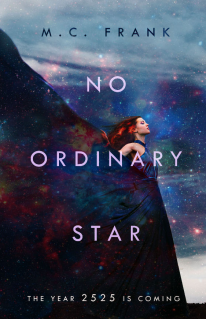 Title // No Ordinary Star (No Ordinary Star #1)
Author // M.C. Frank
Publication Date // November 2015
Publisher // Createspace
Genre // YA, Science-Fiction
Rating // ✭✭✭✭✭
synopsis.
A soldier is summoned to the North Pole, days before the year changes, told to fix the great Clock for a celebration. He has no idea what to do.
A girl, hunted for the crime of being born, almost dies out on the ice. She is rescued by the last polar bear left alive.
A library waits for them both, a library built over a span of a hundred years, forgotten in the basement of an ice shack.
The world hasn’t known hunger or sickness in hundreds of years. It has also forgotten love and beauty.
The year is 2525.
Inspired by the short stories of Ray Bradbury, this futuristic novel is set in a world where Christmas -among other things- is obsolete and a Clock is what keeps the fragile balance of peace.
Written in three installments, this is the breathtaking and sensual story of how two unlikely people change the world, and each other, one book at a time.
Immerse yourself into the icy cold world of this scorching hot new novel.
(Good Reads)

review.
No Ordinary Star is set at the end of 2024; the New Year is on the horizon for a world that is very different to our own.
Set in the future where humans are born in labs, their emotions and health tightly controlled by a daily regiment of pills designed to keep them alive and compliant, and where men and women are kept separate so as to avoid uprisings and complications, there’s a very real dystopian flavour to this science-fiction story. It’s very different to other dystopian-sci-fi books I’ve read previously, in a good way. M.C. Frank has created an immersive world, where what remains of humanity lives under strict rules, governed into obedience. There were some very Handmaid’s Tale-esque references, particularly in reference to way women in this world are treated, and honestly, many of the thoughts I had while reading it are relevant to what’s happening in the world today.
Told from two third-person perspectives, we follow the stories of Felix – a loyal, obedient soldier – and Astra – a young woman persecuted for the crimes of her father – as their paths cross in a cold, frozen landscape. They’ve both been trained to see each other as enemies, and yet they both learn valuable lessons from one another, not the least of which is compassion and understanding for the other.
The atmosphere in this book was incredible – moving from the regimented life of a solider, to surviving in the cold and uncovering the secrets of the mysterious Clockmaster. The pace never slows down; the dialogue is sharp and to the point, and as the characters grow, so do their conversations and our knowledge of what’s happening in the story.
As the first part in a three-book story, No Ordinary Star ends with a cliffhanger and I can’t wait to read part two, No Plain Rebel. While I almost wish the book were longer, I think there’s something satisfying in a shorter story (this one sits at 154 pages) that evokes such wonderful imagery.
(It also doesn’t hurt that the cover art is just beautiful!)
I gave No Ordinary Star 5 out of 5 stars.

I’m also really pleased to announce that I am a member of M.C. Frank’s No Ordinary Star street team. I am absolutely thrilled to be working with the author to promote her work.
As always, my thoughts and opinions do remain my own.