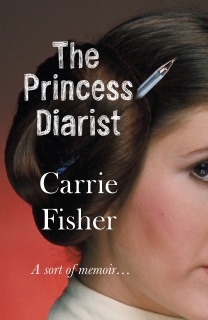 Title // The Princess Diarist
Author // Carrie Fisher
Publication Date // October 2016
Publisher // Bantam Press
Genre // Memoir
synopsis.
The Princess Diarist is Carrie Fisher’s intimate, hilarious and revealing recollection of what happened behind the scenes on one of the most famous film sets of all time, the first Star Warsmovie.
When Carrie Fisher recently discovered the journals she kept during the filming of the first Star Wars movie, she was astonished to see what they had preserved—plaintive love poems, unbridled musings with youthful naiveté, and a vulnerability that she barely recognized. Today, her fame as an author, actress, and pop-culture icon is indisputable, but in 1977, Carrie Fisher was just a (sort-of) regular teenager.
With these excerpts from her handwritten notebooks, The Princess Diarist is Fisher’s intimate and revealing recollection of what happened on one of the most famous film sets of all time—and what developed behind the scenes. And today, as she reprises her most iconic role for the latest Star Wars trilogy, Fisher also ponders the joys and insanity of celebrity, and the absurdity of a life spawned by Hollywood royalty, only to be surpassed by her own outer-space royalty. Laugh-out-loud hilarious and endlessly quotable, The Princess Diarist brims with the candor and introspection of a diary while offering shrewd insight into the type of stardom that few will ever experience.
(Good Reads)
review.
The Princess Diarist was a bittersweet read for me at the tail end of December last year. I’d had the book for only a few weeks when the sad news of Carrie Fisher’s death broke and for a while I was too sad to pick the book up, because she’s such an icon. However, my love for her writing style called me back and I read this, and was intrigued by the story she’d chosen to tell.
I’ll preface this with a simple statement: whether or not Carrie Fisher and Harrison Ford had an affair while filming Star Wars has no bearing on me. I went into the reading of this book purely curious to learn more about Carrie Fisher herself. Her book Wishful Drinking is a favourite of mine, and I was pleased to find the same sense of humour present in The Princess Diarist as Carrie recounts her time on the set of the first Star Wars film. The little stories and anecdotes were a great insight into what it must have been like back then.
What has really stuck with me is the section of diary entries and poems that Carrie Fisher recovered and included in her memoir – written by her teenage self. There were moments of poignancy, loneliness and insecurity. The poems themselves were beautifully written and one of the highlights for me.
The one thing I’ve always admired about Carrie Fisher is her sense of honesty – she told it like it was, unapologetically, which is refreshing to read.
I gave The Princess Diarist 4 out of 5 stars.