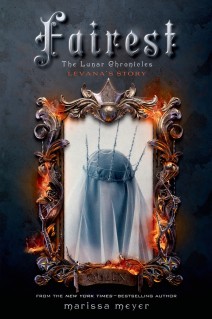 Title // Fairest (The Lunar Chronicles 3.5)
Author // Marissa Meyer
Publication Month // February 2015
Publisher // St. Martin’s Press (Pan Macmillan Australia)
Genre // Young Adult, Sci-Fi & Fantasy
synopsis.
In this stunning bridge book between Cress and Winter in the bestselling Lunar Chronicles, Queen Levana’s story is finally told.
Mirror, mirror on the wall,
Who is the fairest of them all?
Fans of the Lunar Chronicles know Queen Levana as a ruler who uses her “glamour” to gain power. But long before she crossed paths with Cinder, Scarlet, and Cress, Levana lived a very different story – a story that has never been told . . . until now.
Marissa Meyer spins yet another unforgettable tale about love and war, deceit and death. This extraordinary book includes full-color art and an excerpt from Winter, the next book in the Lunar Chronicles series.
(Good Reads)
review.
I’ll be completely honest: I was underwhelmed by Fairest. I read it in between Cress and Winter as suggested and I’m glad I did. Fairest is the bridging book that reveals the history of Queen Levana, the antagonist of Marissa Meyer’s Lunar Chronicles series.
I really enjoyed the Lunar Chronicles but this book fell a little flat because it was almost like an author trying to make readers a little more sympathetic to the villainous character. I love a good villain backstory, and Levana’s backstory is tragic and sad, but it doesn’t excuse all of the things she does as a result, both in Fairest and the wider Lunar Chronicles realm. I don’t think Meyer was trying to excuse Levana’s actions in anyway, but giving a character a tragic story that’s designed to pull at reader’s emotions sort of does that by default.
What the story does highlight, in great form, is just how broken (and kind of unhinged) Levana actually is. While she does start out as a sweet, young Princess, she does morph into a young women determined to get her own way anyway she can without concern for the consequences of others.
The highlight of the entire book, for me, was the backstory of Winter and Jacen that’s woven in beautifully. We find out how Winter came to be Levana’s stepdaughter, and how Jacen became a guard and also a bit about Cinder which put the rest of the series into perspective.
While not my favourite book in the series, Fairest does provide additional details that fans of the series will enjoy. Overall I rated it 3.5 out of 5 stars.